Doctor of Philosophy in Linguistics (PhD)

Linguistics is the scientific study of human language. Linguists are interested in questions such as the following:

Linguistics is a highly interdisciplinary field which combines research methods from the humanities and the social, natural, and mathematical sciences.

Research in the Department covers a broad range of topics, with substantial coverage of syntax, semantics, morphology, phonetics, phonology, and pragmatics. We approach these topics from several different research traditions and backgrounds, with particular strengths in formal-theoretical linguistics, experimental and field linguistics, acquisition, and computational approaches to the study of communicative behaviour. These research areas intersect and overlap considerably, and faculty and students are often simultaneously involved in more than one area. This is part of the attention paid to interfaces between traditional subfields of linguistics and methodological traditions (e.g., laboratory phonology, gesture and speech and learning), one of the great strengths of the Department.

The Department also has a strong commitment to the study of Languages of the Americas, with particular focus on First Nations Languages of Canada, in the areas of documentation and theoretical research, something for which it is well known. Research is not restricted to Languages of the Americas, however; the department also has a long history of work on African languages and there is ongoing research on languages within the Indo-European, Japonic, Sino-Tibetan, and Uralic families as well as Korean.

What makes the program unique?

Our linguists focus on data in all its forms – not just fieldwork, but also high-quality research in labs with cutting-edge resources and tools, such as those found and developed in the Communication Dynamics Lab, the Interdisciplinary Speech Research Lab, the Language and Learning Lab, the Speech In Context Lab, and the Phonological CorpusTools working group.

Students in the Department of Linguistics are given the opportunity to head out into the field and get their hands dirty. Many of the members of our department, from undergrads and grad students to post-docs and faculty members, work directly with language consultants to describe, analyze and revitalize the languages of the world.

Linguists in the department have active working relationships with scholars from many different disciplines and from across the UBC campus, across the country, and across the world.

Our students are actively engaged in research from the moment they enter the department, and they have an excellent track record of publishing and presenting their work at national and international conferences.

I decided to stay at UBC, transferring from the MA to the PhD program, because UBC linguistics is a great fit for what I want to do. Many graduates go into industry, pursue interdisciplinary research (check out the Language Sciences Initiative!), and work directly with communities around BC.

The Faculty of Graduate and Postdoctoral Studies establishes the minimum admission requirements common to all applicants, usually a minimum overall average in the B+ range (76% at UBC). The graduate program that you are applying to may have additional requirements. Please review the specific requirements for applicants with credentials from institutions in:

Applicants from a university outside Canada in which English is not the primary language of instruction must provide results of an English language proficiency examination as part of their application. Tests must have been taken within the last 24 months at the time of submission of your application.

Minimum requirements for the two most common English language proficiency tests to apply to this program are listed below:

TOEFL: Test of English as a Foreign Language - internet-based

Some programs require additional test scores such as the Graduate Record Examination (GRE) or the Graduate Management Test (GMAT). The requirements for this program are:

The GRE is optional.

Application open dates and deadlines for an upcoming intake have not yet been configured in the admissions system. Please check back later.

All applicants have to submit transcripts from all past post-secondary study. Document submission requirements depend on whether your institution of study is within Canada or outside of Canada.

A minimum of three references are required for application to graduate programs at UBC. References should be requested from individuals who are prepared to provide a report on your academic ability and qualifications.

Students in research-based programs usually require a faculty member to function as their supervisor. Please follow the instructions provided by each program whether applicants should contact faculty members.

Instructions regarding supervisor contact for Doctor of Philosophy in Linguistics (PhD)

Applicants should browse faculty profiles and indicate in their application who they are interested in working with. No commitment from a supervisor prior to applying is necessary, but contacting faculty members is encouraged.

* Regular, full-time tuition. For on-leave, extension, continuing or part time (if applicable) fees see UBC Calendar.
All fees for the year are subject to adjustment and UBC reserves the right to change any fees without notice at any time, including tuition and student fees. Tuition fees are reviewed annually by the UBC Board of Governors. In recent years, tuition increases have been 2% for continuing domestic students and between 2% and 5% for continuing international students. New students may see higher increases in tuition. Admitted students who defer their admission are subject to the potentially higher tuition fees for incoming students effective at the later program start date. In case of a discrepancy between this webpage and the UBC Calendar, the UBC Calendar entry will be held to be correct.

The Department of Linguistics guarantees funding of $25,500 plus the cost of tuition per annum for the first two years of the MA program and the first five years of the Ph.D. program to all students accepted to our graduate programs.

Please note that as a condition for receiving this funding you will be expected to apply for any scholarships you are eligible for, either UBC-internally or from your home country.

Funding packages are made up of scholarships, research assistantships, and teaching assistantships depending on individual students, year of study, and the financial resources of the department.

Based on the criteria outlined below, 17 students within this program were included in this study because they received funding through UBC in the form of teaching, research/academic assistantships or internal or external awards averaging $36,897.
Study Period: Sep 2020 to Aug 2021 - average funding for full-time PhD students enrolled in three terms per academic year in this program across years 1-4, the period covered by UBC's Minimum Funding Guarantee. Averages might mask variability in sources and amounts of funding received by individual students. Beyond year 4, funding packages become even more individualized.
Review methodology

All applicants are encouraged to review the awards listing to identify potential opportunities to fund their graduate education. The database lists merit-based scholarships and awards and allows for filtering by various criteria, such as domestic vs. international or degree level.

Graduate programs may have Teaching Assistantships available for registered full-time graduate students. Full teaching assistantships involve 12 hours work per week in preparation, lecturing, or laboratory instruction although many graduate programs offer partial TA appointments at less than 12 hours per week. Teaching assistantship rates are set by collective bargaining between the University and the Teaching Assistants' Union.

Many professors are able to provide Research Assistantships (GRA) from their research grants to support full-time graduate students studying under their direction. The duties usually constitute part of the student's graduate degree requirements. A Graduate Research Assistantship is a form of financial support for a period of graduate study and is, therefore, not covered by a collective agreement. Unlike other forms of fellowship support for graduate students, the amount of a GRA is neither fixed nor subject to a university-wide formula. The stipend amounts vary widely, and are dependent on the field of study and the type of research grant from which the assistantship is being funded. Some research projects also require targeted research assistance and thus hire graduate students on an hourly basis.

Canadian and US applicants may qualify for governmental loans to finance their studies. Please review eligibility and types of loans.

All students may be able to access private sector or bank loans.

Many foreign governments provide support to their citizens in pursuing education abroad. International applicants should check the various governmental resources in their home country, such as the Department of Education, for available scholarships.

The possibility to pursue work to supplement income may depend on the demands the program has on students. It should be carefully weighed if work leads to prolonged program durations or whether work placements can be meaningfully embedded into a program.

International students enrolled as full-time students with a valid study permit can work on campus for unlimited hours and work off-campus for no more than 20 hours a week.

A good starting point to explore student jobs is the UBC Work Learn program or a Co-Op placement.

Students with taxable income in Canada may be able to claim federal or provincial tax credits.

Canadian residents with RRSP accounts may be able to use the Lifelong Learning Plan (LLP) which allows students to withdraw amounts from their registered retirement savings plan (RRSPs) to finance full-time training or education for themselves or their partner.

Applicants have access to the cost calculator to develop a financial plan that takes into account various income sources and expenses.

31 students graduated between 2005 and 2013: 3 graduates are seeking employment; for 1 we have no data (based on research conducted between Feb-May 2016). For the remaining 27 graduates: 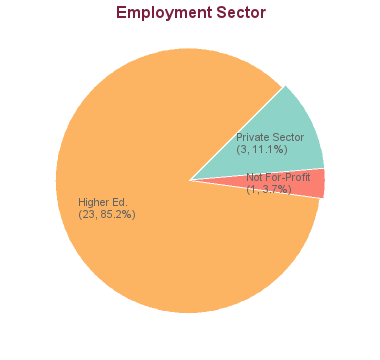 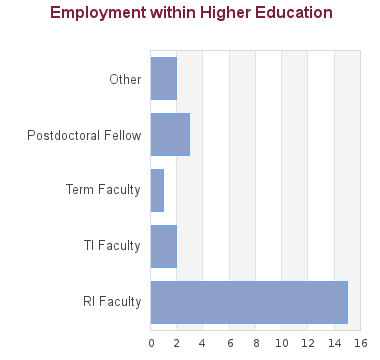 You may view the full report on career outcomes of UBC PhD graduates on outcomes.grad.ubc.ca.

These data represent historical employment information and do not guarantee future employment prospects for graduates of this program. They are for informational purposes only. Data were collected through either alumni surveys or internet research.

These statistics show data for the Doctor of Philosophy in Linguistics (PhD). Data are separated for each degree program combination. You may view data for other degree options in the respective program profile.

Admissions data refer to all UBC Vancouver applications, offers, new registrants for each year, May to April [data updated: 7 April 2022]. Enrolment data are based on March 1 snapshots. Program completion data are only provided for datasets comprised of more than 4 individuals. Rates and times of completion depend on a number of variables (e.g. curriculum requirements, student funding), some of which may have changed in recent years for some programs [data updated: 19 October 2021].

A doctoral citation summarizes the nature of the independent research, provides a high-level overview of the study, states the significance of the work and says who will benefit from the findings in clear, non-specialized language, so that members of a lay audience will understand it.

Linguistics covers the core areas of phonetics, phonology, semantics, and syntax with the possibility of specializing in First Nations languages, African languages, first language acquisition, and experimental linguistics as well as specialized interaction with other disciplines such as art, computer science, music, philosophy, and psychology in the cognitive systems stream.

Departments/Programs may update graduate degree program details through the Faculty & Staff portal. To update the application inquiries contact details please use this form.

I grew up in the suburbs of Vancouver and absolutely love it here. As much as I was a little apprehensive about completing yet another degree at UBC (this one will be my third), the academic excellence and beautiful setting associated with UBC are difficult to resist!

Curious about UBC for grad school?

Our community of scholars is one of the world’s finest, committed to discovering and sharing knowledge, and to tackling the challenges that face our world.

Learn more about why you should attend UBC