During my time working in industry I recognized a gap between academic research and practice. In returning to school for a graduate degree I hope to bridge this knowledge gap, in particular as it relates to climate change considerations in engineering design.

Not only is Vancouver home for me but it is also the alma mater of both my parents! I did my undergraduate degree at Queen’s University in Ontario and had been working for four years in Vancouver before deciding to return to school. UBC was the natural choice as a top Canadian university with cutting edge research in my field of interest.

I was interested in the work coming out of my supervisor’s lab group.

How even a big university like UBC can feel so small and welcoming once you get to know it.

UBC was the natural choice as a top Canadian university with cutting edge research in my field of interest.

I believe that working for four years before returning to school gave me a good sense of what I was interested in and excited about and how I work best.

Anything and everything outdoors! I like to ski, climb, hike, bike, play soccer, paddle etc. essentially wherever the weather takes me.

Work-life balance is important in graduate school, make sure to make time for yourself and the things you love to do. Also, remember that unexpected results are not bad! 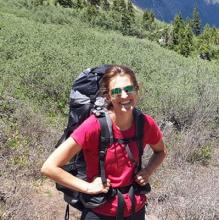 In Canada’s mountainous regions, steep alluvial fans are often areas of concentrated infrastructure and development. These fans are created largely by hydrogeomorphic events, including floods, debris floods, and/or debris flows, each of which threatens human life and infrastructure. Processes acting to degrade alluvial fans are both temporally and spatially important but their relevance to flood hazard on fans has been little studied. The increased channelization and entrenchment of flow on fans occurring through degradational processes may act to contain consequent flow events and shift flood hazard down-fan. My research will investigate the role and nature of degradational processes in alluvial fan flood hazard. Using a scaled laboratory model, alluvial fans will be generated with varying durations of primary vs. secondary process inputs. Photographic data will be collected throughout the experiments and converted to 3D digital models of the fan surface, using state-of-the-art photogrammetry techniques. The alluvial fans generated by the experiments will be compared on the basis of flood hazard risk. For the purposes of this analysis, flood hazard will be characterized as the combined probability of avulsion potential and the channelized fraction of the fan surface. Climate change is predicted to increase the frequency and magnitude of hydrogeomorphic events. With increasing development pressures in mountainous terrain and the predicted increase in extreme hydroclimatic events, I believe this topic is both timely and critical for the protection of lives, assets and important national interests. The proposed research will form a valuable contribution to the state of practice and will improve understanding of the drivers of flood risk on alluvial fans.