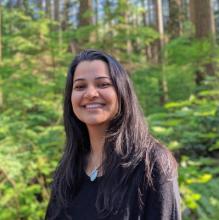 I have formal training in economics and have worked at the nexus of economic and public policy research and data analytics for over a decade. My last research engagement with the World Resources Institute had a pivotal role in reinforcing my belief that action-oriented research can inform changes in policy and governance to solve real-world problems. It also became apparent that these problems do not follow any disciplinary boundaries, and often need a diverse set of research toolboxes. I felt that an interdisciplinary PhD degree would provide me the rigorous training to contribute to these policy issues effectively through a broader perspective. I was also aware that research and policy formulation does not happen in isolation from the community and the local context. I was looking for an opportunity to understand the socio-economic and policy context in Canada through collaborations within and outside of academia. I specifically sought a PhD program that would allow me to develop a suite of analytical and research skills; develop partnerships with government, community, and research organizations; and in the process of learning and working on issues that I feel passionate about, in an intellectually stimulating environment.

There are several reasons for this: Firstly, UBC is among the leading universities in the realm of environment and sustainability research. Secondly, my program at UBC offers exactly what I was looking for in a PhD program and provides opportunities for folks looking at impacting the ground change through rigorous academic research. Thirdly, as a sustainability researcher, the prospect of living in a city and campus that have progressive sustainability mandates and operates like a living laboratory for climate action, is inspiring! Finally, I was looking for a university that would provide a supportive environment and ecosystem to pursue my studies while raising a young family at the same time. UBC is among the few universities that provide, both, the physical and social infrastructure for this.

A decade of work experience had taught me that potentially effective policy ideas often face challenges during implementation. Developing a critical eye to unpack these challenges and measuring impact are just as crucial as the research idea. With this in mind, I was looking for a doctoral program that focuses on impact-oriented and problem-focussed research to solve real-world issues, and allows one to apply a lens broader than any one restrictive discipline while doing so. The Institute for Resources, Environment, and Sustainability (IRES) promised to be exactly what I was looking for, and has proved to be so much more than that for me. The vast knowledge, perspectives, and experiences of the IRES peers and faculty have been overwhelming and inspiring.

I was pleasantly surprised by the incredible support and encouragement provided by the IRES and UBC community, something that I had not initially expected. Vancouver is a multicultural and beautiful city surrounded by the ocean and mountains, filled with forest trails and parks. Though for me, the biggest surprise was how green (literally, not only environmentally or politically) Vancouver is – the diverse range of trees in the city look grand in their different avatars through the four seasons!

Learning and growing within a community of diverse, highly motivated, and intellectually stimulated people working in a collaborative environment that extends beyond academia!

I worked for over a decade before starting my PhD degree. This has prepared me well for the rigour of graduate school, has allowed me to have a broader perspective to research, and nudged me to intentionally seek a study/work-life balance. Functionally, aside from project management and working in diverse collaborative environments; my work experience also helped me develop statistical, research and software skills that are proving to be useful during my doctoral research too.

I have enjoyed exploring the trails, beaches, and parks in the city with my family, and I cherish and love my time with my daughters at home playing or painting.

Graduate school may seem daunting initially but give yourself some time and ask for support when you need it. Most of us are usually facing the same challenges; and peers, faculty and staff are more willing to help than we think. These relationships are valuable, not only in academic pursuits, but in and of themselves; and will be a part of your life far past your graduate school years.

My doctoral research aims to investigate the role of repair and reuse as waste prevention strategies within a circular economy context. There is a significant focus on recycling in circular economy literature. Although important in its own right, recycling has had a limited impact on reducing waste, since only a small proportion of the initial resources can be extracted due to the high costs and complexities involved in recycling processes. Within circular economy literature, the most neglected of the 3Rs of Reduce, Reuse, and Recycle, is ‘reuse’ (and its associated aspect of ‘repair’), about which few strategies and policies have been conceived or adopted. In fact, in recent years we have witnessed a systematic dismantling of the repair economy in high-income countries, fuelled by a number of factors. On the industrial side, practices such as built-in obsolescence, phasing out spare parts, and using brand-specific components with trademark restrictions have impacted the ability to repair. On the consumers' side, there is a diminished incentive to repair due to the abundant availability of an avalanche of cheap products; and repair conjuring vastly different associations from constituting a strategy of coping with poverty, to a symbol of status associated with ‘green’ behaviour. These factors, coupled with an absence of government regulation on industrial practices, have led to several movements across the globe advocating for the revival of repair. Some change has begun to be realized in recognized policy frameworks, with established legislations safeguarding a consumer’s choice to repair a broken object. My research attempts to understand these socio-economic, policy, and industrial dynamics that mediate repair and reuse in an economy. I use a mixed-methods comparative approach for this research. My research is based in Canada and India: regions that reflect my countries of residence and birth respectively; and have vastly different repair paradigms and institutional contexts, providing a useful comparison for policy considerations. I hope to collaborate with people, governments, and organizations that are already engaged with the challenges and solutions that my research seeks to inform, to allow the research evidence to be mobilized into policy.