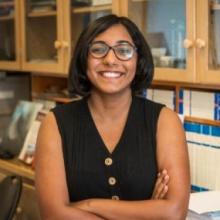 I've always been passionate about research and wanted to be a scientist. Being the study of what was, what is and what will be of the universe and its workings, I fell in love with Physics. I hope to pursue a career in academia which lets me follow my love for research and let's me share that passion with the next generation of physicists through teaching. A graduate degree was the natural next step in this direction.

UBC is one of the top universities in the world. With world class research facilities, a supportive and nurturing scientific community and financial support through scholarships and teaching, UBC offered everything I needed to follow my dreams.

The PHAS department offers a niche intellectual environment that allowed me to connect with experts in any research field. Also, the program is well supported financially and part of the financial support comes from TAing. I loved that I get to teach in addition to learning.

My biggest surprise in Vancouver was how much people loved beach volleyball!!

I love the time I spend on my research. Also, the PHAS department has many outreach activities and I've started volunteering for these.

The program lets you make a lot of connections that may be helpful. UBC also holds workshops that are relevant.

My research experience and internships from my undergrad helped me streamline the area of research I wanted to work in. This was very helpful in picking my graduate school and gave a lot of points on my CV.

I've been more sporty since I moved to Vancouver and have reconnected with badminton and swimming.

It's important to try showing up to events, be it social or academic. You would learn a lot from just being there and also get to connect with people who are passionate about the same things as you. 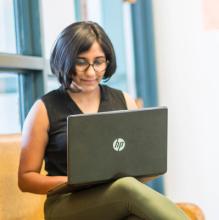 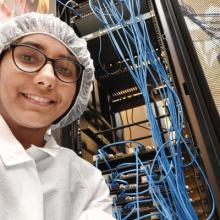 The total "visible" matter in the universe, i.e. what we can see with our eyes or with a telescope, makes up only ~5% of the total contents of the universe. The remaining 95% is made of two unknown components called dark energy and dark matter. Although the existence of dark matter has been well supported through cosmological evidence, dark matter has never been detected. What dark matter is and its properties remain a mystery and physicists have been trying to answer this very question for decades. I work in a direct dark matter search experiment called SuperCDMS which looks for signatures of dark matter interactions with the atoms in semiconductor crystals held at sub -zero temperatures (close to -273C). The next generation of the experiment, called SuperCDMS SNOLAB is expected to start taking data in 2022, in a facility in Sudbury (called SNOLAB) which is located 2km underground. I'm currently involved in analyzing data that comes from our test facility (called CUTE) in SNOLAB which helps us understand the backgrounds and detector performance in the mine and if everything is well understood look for dark matter signals. I'm also involved in developing and testing software tools that will help acquire and process SuperCDMS SNOLAB data.