Ashley Moore is a doctoral student in the Faculty of Education, investigating the intersections between sexual identity and language learning motivation among Japanese gay male learners of English. 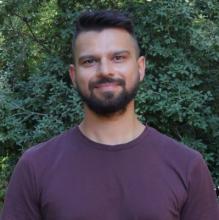 During his master's degree, Moore examined the experiences of lesbian, gay, bisexual and transgender students in an English class run by a Japanese NPO. While conducting interviews, three out of five subjects expressed that they’d prefer if they talked in English, instead of Japanese. When asked why, their response was that they felt couldn’t tell the truth about their sexual identity in Japanese. That inspired him to pursue his doctoral research.

According to the IDF recipient, up until now, language motivation has been the focus of much research on this area, with little consideration for what pushes people away from languages.

“A resistance to using your first language is quite well documented in immigrant children, but all of five of my participants were adults and they had all learned English later in life.” he explained. “The problem is we just don't know much about the causes and the process of the development of this kind of feeling. That is what I hope to solve.”

In addition to his doctoral research, Moore is also looking at queer issues in language education. He’s committed to creating equitable classrooms. “I believe that if we look at queer issues in language education, it also gives us insight into a whole range of other kinds of inclusion issues—things around gender, things around disability, things around race. I think by pursuing one kind of inclusion, we can open it up for many other kinds of work.”

After completing my master's degree, I taught at two universities in Japan. During this time, I carried out a qualitative case study that examined the experiences of lesbian, gay, bisexual and transgender students in an English class run by a Japanese NPO. After a lengthy and exacting review process, I was lucky enough to have a paper based on this research published in a well-respected journal. However, the whole process of getting that paper accepted made me realize how much more there was to learn. I had gotten that far, but I knew I wanted to go further. This experience ultimately set me on my current pursuit of my doctorate.

I spent over a year searching through the websites of various universities around the world, looking for the very best programs and potential supervisors. The faculty in the Department of Language and Literacy Education boasts many of the leading scholars in my chosen field and I knew UBC would be a great place to push myself. The fact that I was encouraged to take courses offered by other departments was very attractive given the interdisciplinary nature of my research interests. In addition, I think UBC offers great support for international students throughout the sometimes fraught processes of application, moving and finding sources of funding.

Simply put, my program offers me the opportunity to learn from researchers who are pushing the boundaries of applied linguistics and education.

I was truly surprised by the level of support the university offered to me and my partner as we prepared for our move from Osaka to Vancouver. When I had questions about my application for my own study permit and sponsoring my common-law partner's work permit, a member of staff from UBC's International House actually rang me at an arranged time to offer useful advice - I definitely wasn't expecting that level of support!

At the moment, I'm enjoying expanding my theoretical knowledge. In the future, I can't wait to apply that knowledge to my own research.

I think a major challenge for researchers today is finding ways to get our results and their implications out of the journals and into the wider public domain. This will require learning a different style of communication, but I hope that by developing this skill, the clarity of my academic writing will also benefit in the long run.

I've been impressed by the emphasis within our program on the importance of public scholarship. There's a lot of exciting work going on such as the projects coordinated by the Digital Literacy Centre.

Living and working in Japan for 10 years both prepared me for the ups and downs of living abroad, and gave me plenty of experiences that piqued my interest in the intersections of language, identity and power.

The courses here at UBC are challenging! But that's why we chose to come, right? Thanks to my classmates (and teachers!), I'm finding a way to meet these challenges. So my advice would be to celebrate and support each other- no one can do it alone. 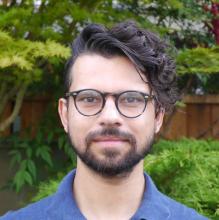 In a previous research project, I investigated the intersections between sexual identity and language learning motivation among Japanese gay male learners of English. During the course of this study, I uncovered a surprising finding; rather than Japanese, three out of five participants preferred to use English (or other additional languages) during our interviews. Over the years, this incidental finding has stayed with me, gnawing at my curiosity. While living in Japan for nine years, I would occasionally meet other Japanese bi/multilinguals - not all of them queer - who expressed similar feelings toward their mother tongue. What could cause a person to wish to avoid the language of their family, the language of their childhood? For my doctoral studies here at UBC, I hope to answer the following question: Why do some Japanese late bi/multilinguals report wanting to avoid using Japanese? The answer has the potential to enrich our understanding of social emotions and identification processes among bi/multilingual individuals.