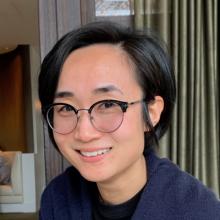 I did my second MA in education at UBC first and at the time, tea ceremony was only an intellectual curiosity, and I did not think it could be a research topic until I became more familiar with the literature. I realized that tea ceremony learning is under-researched and that it is a worthy topic beyond my personal interest. At that point it became a scholarly pursuit for my PhD. The possibility of an academic career afterwards is another reason.

I have started Chanoyu class with Urasenke Vancouver Branch, which is the only official Urasenke School in Canada, before I got admitted into the PhD program. I have also found potential supervisor and committee members who are interested in working with me, so to continue my PhD at UBC seems natural to me.

Rigorous scholarship carried out by wonderful scholars and fellow graduate students, very supporting staff members and stimulating intellectual environment of EDCP have been a bless.

I really enjoy the rainy days in Vancouver, which are plenty throughout the year. I live on campus and my desk is facing the Reconciliation Pole playground. The experience of working from my computer on rainy days, looking up occasionally from my desk, the sound of falling rain, the smell of moist air and the view of greens, has become the timber of my PhD life, which will form lasting memories.

The tea drinking experience back in Beijing, the aroma, the texture of tea and different sensations it caused me, has created curiosities for me. It took effort to articulate those curiosities and to find people who are interested in and supportive of what I hope to do. It is a lovely surprise that SSHRC funded my project, so if I could add one more advice, be curious and passionate about what you do.

Be adventurous—don’t be afraid to take risks. Trust yourself unconditionally. Exercise self-care at all times.

The exact origin of tea remains ambiguous, but in Chinese myths, it is believed to be discovered by Shennong (2737-2697 BC) as an antidote to poison. Throughout history and across different geographical regions, people have localized and formed their own tea traditions, but only the Chinese and the Japanese have associated tea drinking with spirituality and ritual. My research approaches the Chinese and the Japanese tea ceremony from an aesthetic pedagogical perspective, highlighting the knowledge generated through kinesthetic learning and the value imbued in traditional cultural practices, which significantly broadens our horizon on education-writ-large. Findings of this research will enable us to move closer to a tentacular worldview, where human beings develop a harmonious and reciprocal relationship with the world and its inhabitants. Tea ceremonies bring people together in the company of each other and make people more aware of the shared humanity in each and every one of us, despite visible differences, which is of great importance in contemporary societies that are steeped in disputes and estrangement.