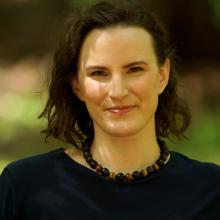 The pursuit of knowledge is one of my core values, and I aspire to the independence that a doctoral degree could afford me as a researcher. I greatly look forward to one day leading my own research program and mentoring students as we continue to pose critical questions relevant to forest entomology. My career objective is to use forest insects as model systems for the investigation of hypotheses that remain elusive within the broader field of evolutionary ecology.

UBC has an excellent international reputation for producing innovative scholars, and the Faculty of Forestry is no exception. Throughout its history, the Faculty has educated numerous influential figures in forestry, including notable forest entomologists. I completed my previous degrees (BFA in Visual Arts, BSc, and MSc in Biology) at the University of Victoria and it was ideal for me to remain on the south coast of beautiful British Columbia.

The Forest Insect Disturbance Ecology Lab (FIDEL) in the Department of Forest and Conservation Sciences is directed by renowned forest insect ecologist Dr. Allan Carroll, whose research interests align closely with my own. The Faculty of Forestry and the wider UBC community provide remarkable support to graduate students as they pursue their degrees.

Vancouver is a beautiful city, and although my primary residence is in Victoria (on nearby Vancouver Island), I have greatly appreciated the time I have been able to spend working at and staying near UBC. Engaging with colleagues and friends in a larger city has been a lot of fun.

The pursuit of knowledge is one of my core values, and I aspire to the independence that a doctoral degree could afford me as a researcher.

I have always been curious about the evolutionary outcomes of biological interactions, and how and why organisms evolved specific ecological traits. The functions of symbioses in nature are particularly interesting to me, as forest disease complexes (insect–pathogen) that are innocuous in their native ranges can sometimes become damaging to ecosystems in their introduced ranges.

The competitive climate of academia, particularly the search for a tenure-track faculty position with a reputable university, is a challenge that could be compounded by the 2020 global pandemic. Women continue to make breakthroughs in our roles as scientists and researchers, and we all must strive to correct all types of systemic inequalities that persist across disciplines.

I feel that my PhD has afforded me the opportunity to operate my own “mini-research program,” which will be of great benefit to my future career. Experience instructing Forestry (Biotic Disturbances) labs has increased my fondness for teaching and shifted my focus to developing different teaching strategies, particularly during the 2020 transition to online learning.

I have had an extended journey throughout higher education, having completed two undergraduate degrees and a master’s degree before coming to UBC. I firmly believe that there is no wasted education and that skills and knowledge acquired in one discipline can be transferred to others. The support of my mentors (from the University of Victoria and the Canadian Forest Service) and family greatly assisted my progress, and I could not have made it this far in my education without them.

Take time to work in different environments before commencing a graduate program – discover what you love to do! Choose your program and research area carefully, graduate degrees are a large investment of time and you should feel supported and engaged throughout your program. Supervisory styles and lab environments vary widely and can greatly affect your experience as a graduate student, so do some investigation before you accept an offer. 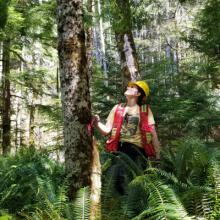 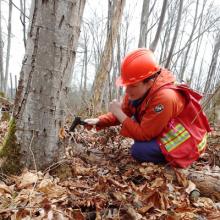 Associations between herbivorous insects and fungi range from weak commensal relationships to highly evolved phytopathogenic mutualisms. Understanding the potential for herbivorous insects to carry phytopathogenic fungi among host plants is critical to managing introductions and range shifts of both insects and fungi into coevolutionarily naïve habitats. Alniphagus aspericollis, the alder bark beetle, is an unusual bark beetle in that it infests and kills a hardwood tree, red alder (Alnus rubra) and, unlike most tree-killing bark beetles, is not regularly associated with ophiostomatoid “blue-stain” fungi. This beetle is instead associated with a Neonectria canker pathogen, marking a novel type of bark beetle–fungus association and a unique opportunity to assess the processes by which mutualisms between insects and fungi can evolve. My research uses the unique alder bark beetle–Neonectria system to evaluate hypotheses regarding the functions of fungi in mutualistic relationships with bark beetles, thereby improving our ability to predict the ecological impacts of novel organism interactions.