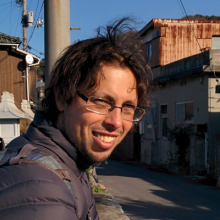 I love learning, but also discovering new things and explaining them to others — the core activities of a research degree! It's also an exciting time to be doing theoretical physics, with lots of unexpected and fun developments. I wanted to be part of the action!

My supervisor is a leading scholar in the field, and part of the Simons Foundation It From Qubit collaboration, an international/interdisciplinary network with nodes all over the world and opportunities for travel and research. UBC also has a great reputation for graduate study. Last but not least, Vancouver is an amazing city and a great place to live.

I had heard all about the rain, but arriving in August, the weather was unexpectedly mellow and sunny! Great weather for exploring the city and surrounds before term began. I've also been pleasantly surprised by the number of used bookstores in and around Vancouver.

I'm looking forward to the comprehensive exam. In physics, preparing for the comprehensive involves conceptual/quantitative mastery of a broad range of core topics, a sort of lingua franca shared by different subfields of physics. The idea is to make sure you are a well-rounded physicist who can speak to colleagues in other areas. I think this is a worth goal!

Before moving to UBC, I did an MSc in particle physics at the University of Melbourne. Being part of that research community — and seeing how theoretical physicists collaborate, troubleshoot, critique, and generate new ideas — was a great way to prepare for the program here.

I'm an avid reader of literature and nonfiction, and spend a lot of time (not to mention money) fossicking for books. I also enjoy drawing and hiking, two activities that can be profitably combined.

Having a good work-life balance is essential to being successful! Taking breaks helps you recharge and stay enthusiastic about your research.

Suppose I give you a tightly sealed box, and ask you to figure out what's inside. By measuring the box surface, carefully shaking, etc, perhaps you can work out a few things. But for a complicated object, the information you can get this way seems limited. Remarkably, if I give you a universe in a box, then careful, fine-grained measurements at the surface will reveal everything! The interior of the box is miraculously encoded on the surface, a bit like a hologram. Hence, this encoding is called the holographic correspondence. A priori, there is a big difference between physics inside the box and out. The universe on the inside is governed by gravity, a geometric theory where objects can stretch, curve and collapse into black holes. The surface, in contrast, obeys quantum mechanics, where the objects are states (like Schrödinger's living or dead cat) and we combine things algebraically. The correspondence gives us a way to take algebraic structure from quantum mechanics and geometrise it. Conversely, we can learn about gravity by projecting it onto the box surface and using quantum theory. Though we don't live in a universe-in-a-box, there is still plenty to learn from this example about about gravity, quantum mechanics, and how to combine the two. At the moment, I'm interested in the geometric version of (quantum-mechanically) combining multiple surfaces patches. I'm also trying to use the boundary as a vantage point to peer into black holes, and learn more about their different internal states.