I am always interested in learning new things and expanding my knowledge in different areas of life. I realized that having an advanced degree opens more doors and opportunities to contribute to health-related research. Growing up, I was always fascinated by blood and transfusion due to an unfortunate experience of losing an aunt from hemorrhage during birth. After completing my undergraduate degree in biology, I joined a hematology lab at the Center for Biologics Evaluation and Research U.S. Food and Drug Administration which allowed me to develop an interest in platelets and clotting factors involved in sealing injured blood vessels. After completing post-baccalaureate research, I decided to join my current lab at the UBC Centre for Blood Research to pursue research involving platelets, megakaryocytes, and a hemorrhagic virus (dengue).

My decision to join UBC was mainly because I found a wonderful supervisor and research center in the area of my interest. UBC is home to many brilliant minds that are at the forefront of cutting-edge research.

The Department of Pathology and Laboratory Medicine is a wonderful program that covers many research areas with structured paths toward obtaining MSc and Ph.D. degrees.

I initially didn't know much about UBC, Vancouver, and British Columbia. I was fascinated when I learned UBC is high ranking university around the globe and among the top in Canada. In addition, UBC is located in Vancouver, one of the best cities in the world. Vancouver made me fall in love with outdoor activities and soaking up the breathtaking landscapes.

It is a very long list, but it includes an interest in learning, the ability to embrace discomfort, the experience of working/living in diverse communities, the ability to easily connect to people, being adventurous, etc.

I recommend students to focus on developing many life skills and character that will sustain them through the exciting, yet challenging, road of being a graduate student. I would encourage new students to work on self-development alongside their work. Lastly, I advise them to utilize UBC's various resources to maintain physical and mental wellbeing. 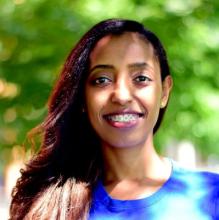 According to the World Health Organization, about 50% of the world’s population lives in regions where the dengue virus (DENV) is endemic. Approximately 400 million people are infected yearly, of which nearly half are asymptomatic despite high virus titers. Annually, about 25,000 deaths are reported from symptomatic patients exhibiting severe hemorrhage and vascular leakage. The most common clinical manifestation observed in all forms of DENV infection is the reduction of platelet numbers which can lead to clinical bleeding (thrombocytopenia). However, the mechanism by which DENV induces thrombocytopenia is not well understood. DENV is an RNA virus that can reproduce in various host cells. Our lab previously demonstrated that DENV binds platelets. Although platelets are enucleated they have the necessary cytosolic machinery to translate RNA and synthesize proteins. Since DENV has an RNA genome and binds to platelets, we have shown that platelets can also replicate and assemble infectious DENV. Here, we utilize a qualitative proteomics approach to map the newly synthesized proteins in platelets due to DENV infection and consequent stimulation of cellular protein translation. This is compared to the treatment with the known platelet agonist thrombin or combined treatment. Moreover, we are investigating the involvement of virus-encoded NS1 protein expression on the surface of platelets and the cells which platelets are derived, megakaryocytes, in DENV-induced thrombocytopenia. Thus, cell surface NS1 expression may function to trigger the immune attack of platelets or megakaryocytes resulting in virus-induced hemorrhagic pathology. This probability has never before been addressed. Significance: Identification of critical proteins found to be affected by DENV, the proteomics data collected, and the detection of cell surface exposure of viral proteins will help devise an antiviral strategy to attenuate DENV infection and mitigate clinical symptoms of thrombocytopenia.