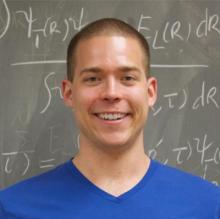 After the discovery of the Higgs boson in 2012, it is an extremely exciting time for the field of particle physics. Being able to take part in the potential discoveries at the LHC was something I simply could not pass up.

The ATLAS group at UBC is among the best in Canada.

Currently, there are four known fundamental forces acting on the matter in our universe: gravity, electromagnetism, the strong nuclear force, and the weak nuclear force. Gravity is described by Einstein’s theory of general relativity, while the three other forces are best described by the standard model of particle physics. These theories are very successful, in that they have been validated time and again by experimental tests with extremely high degrees of accuracy. However, these models are incomplete. For example, the galaxies in our universe seem to contain much more matter than what is observed; this is what is called dark matter, and what is not explained by the aforementioned theories. Also, the fundamental particles called neutrinos are predicted to have no mass, but they do. To solve these shortcomings, many different extensions to the standard model have been posited. The vast majority of these new theories predict the existence of new forces of nature. These new forces would reveal themselves through heavy force-carrying particles that could be produced at very high energies. My research focuses on analyzing the second set of data collected by the ATLAS detector at the Large Hadron Collider (LHC) with a view to finding specific events that would prove the existence of new forces of nature.