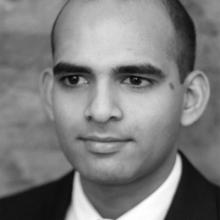 Having worked before with musician communities in Sri Lanka, I was interested in further researching the musical and social dimensions of Sri Lankan traditional musics, and I felt that academia would provide a supportive environment within which this could be done.

I was drawn to study ethnomusicology at UBC through the writings of Professor Michael Tenzer, who is now my PhD supervisor. Tenzer’s thought-provoking work with cross-cultural musical analysis has reassured me of the value of music theory in studying oral musical traditions, and inspired me to seek both social context and deeper structural understanding of musics which intrigue me.

My research looks at how the "up-country" drumming tradition of Sri Lanka has changed during the postcolonial era in tandem with the growth of modern Sinhala-Buddhist consciousness. It will involve musical analysis theorizing the organizing principles behind the drumming vocabulary, and anthropological exploration critically examining the social histories that have created the environment that currently sustains up-country performance and its surrounding discourses.

Through this research, I hope to uncover the ways in which the sound of the up-country tradition has been exploited as a cultural identity marker of the majority Sinhala-Buddhist community and manipulated in ways that obscure its origins as a village-based and lower-caste ritual activity. This line of inquiry is timely in context of the current ethnic-chauvinistic climate that has characterized the post-civil-war period in Sri Lanka, which emphasizes ethnic and religious purity in denial of the country's multi-cultural legacy.

While my fieldwork data will allow me to explore and interpret the idiosyncratic ways in which postcolonial modernity has impacted the up-country drumming vocabulary (and vice versa), thereby contributing to a growing body of scholarship focused on 20th-century nationalist movements in South Asia, I will also use this information as a starting point for theorizing up-country traditions in a broader regional and historical context. The results of my fieldwork and subsequent ethnographic representation will form the basis of publications aimed at a Sri Lankan academic readership, and at the broader ethnomusicological scholarly community.