As an undergraduate I did field work in New Zealand studying jade carving and resource management, and in spite of the wonderful support of my academic department, I felt like I was in over my head. As I went out each day and did interviews, I thought to myself, "I am getting the hang of this now, but I don't think I will really be any good at it unless I go back to school and really study the theory and methodology." So I took a few years off after college to figure out where and how I wanted to pursue my graduate work, and this gave my ideas time to solidify into manageable goals.

I chose to come here because this is the center of the universe in my field of study. I feel fortunate to be able to live and play in such an incredible place while simultaneously researching human interactions with the environment reaching back thousands of years. I also came on a whitewater kayaking trip to BC in 2006 and fell in love with the place. When I figured out that the UBC Anthropology department had the type of program I needed, it was a dream come true.

I chose to explore the relationship between Upper Skagit people and the Skagit River valley because freshwater and the issues surrounding it are quickly becoming one of the most critical environmental and social challenges facing today's world; damming, irrigation, and access to clean drinking water are only a few of the facets. Increasing demands for hydroelectricity make the raising of the biggest dam on the Skagit River, Ross Dam, a pressing possibility that has been tabled by a treaty between the US and Canada until 2065. While the dam-raising is many decades away, conversations about the impact on the watershed attempt to gain input from indigenous peoples on both sides of the international border, including Upper Skagit, through organizations like the Skagit Environmental Endowment Commission (SEEC). While decision-makers in this region and elsewhere are beginning to listen to indigenous voices as they explore water management solutions, many barriers to effective communication remain in place. My research attempts to overcome these barriers by documenting human relationships with a river from the perspective of people whose ancestral ties to the river in question extend back thousands of years before Euro-American settlement, and by framing these perspectives in a way that may then be incorporated into policy-making processes. The potential for the Skagit River and Upper Skagit people to serve as an example for other communities dealing with water issues makes this project a significant step in the direction of sufficiently documenting contemporary indigenous relationships with the environment while exploring opportunities for these people to play a role in determining the future of their traditional territories.

My goal is to teach anthropology at the university level while continuing my research with Native American and First Nations communities and working with them as they navigate the complicated legal processes involved in reclaiming rights and traditional territory. Tribes and First Nations often go to court, and I have been inspired by my supervisor, Bruce Miller, as I've watched him work on behalf of several groups in their pursuit of self-determination.

What has been your most memorable Vancouver experience so far?

My most memorable Vancouver experience so far has been riding the ferry from Horseshoe Bay to and from the Sunshine Coast. I say this because nothing better encapsulates this place for me than being on the water, winding around evergreen-covered islands and coastline, on a bright, sunny day. I guess I'll have to do it in winter, too, just to balance things out.

Living in Canada is a wonderful experience for an American. It has broadened my political and social horizons in ways that I believe would benefit many Americans. By this I mean stepping outside of the assumption that the US is the center of the universe. My advice is for American students to come to Canada and start asking questions about how things work differently from what you are used to: politics, sports, language, arts, you name it—there is plenty that will surprise you. As a young person coming from the US, the health care system in Canada is also a big plus.

My dissertation research examines Upper Skagit people's historical consciousness of the Skagit River valley and asks how this consciousness has shifted throughout the colonial process in relation to changes in the landscape. I approach this question from an overarching theoretical mode of historical anthropology that encompasses consciousness, oral narratives, the environment, and Coast Salish ethnography, allowing me to explore the interplay between consciousness and materiality. I obtain evidence using three overlapping methods of inquiry: the collection of oral narratives with contemporary Upper Skagit people, participant observation within the Upper Skagit community, and archival work with documents pertaining to the post-contact history of the Skagit River valley as well as field notes and oral narrative transcriptions collected by earlier anthropologists working among the Upper Skagit throughout the 20th century. With a data set of oral narratives collected over a sixty-year period, I identify key landscape symbols and metaphors present in Upper Skagit consciousness over several centuries and pinpoint historical moments and factors that caused the treatment of these symbols and metaphors to change. 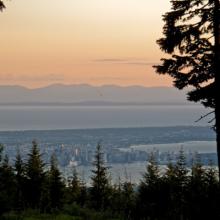