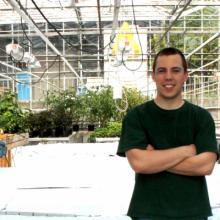 I like to understand how plants work and respond to their environment. A graduate degree will give me flexibility to pursue research topics that interest me and I believe are worthwhile. I enjoy teaching and research and this gives me the possibility of continuing that on into the future.

The Forestry program at UBC is a world-class program with a strong research record. Our lab has industry and government collaboration which increases the reach and applicability of our research. With lots of conference opportunities, an interdisciplinary faculty and encouraging researchers, grad school has been a rewarding experience so far.

The opportunities and programs for professional development and guidance offered at UBC for graduate students were a good surprise. It seems like the opportunities to develop professionally and academically are abundant on campus. As a forestry student, the proximity to a variety of surrounding forest types and hands-on learning makes the experience in Forestry at UBC unique.

I hope to contribute to research examining how plants use nitrogen and identify potential areas to improve nitrogen utilization in plants. Hopefully we can determine whether it is possible to breed for increased nitrogen uptake efficiency in plants. Further, to determine if climate change induced alterations in the nitrogen cycle will impact the fitness of populations of plant species with large geographic ranges.

It gives an indication that my research project is worthwhile and important. It also provides the financial security to conduct research without the worry of financing my education.

Network and take opportunities to meet your fellow students and get involved in activities that are not directly related to your program. The more you work and discuss outside your normal research project, the more well-rounded you will be.

In the future, climate change is predicted to place significant environmental pressure on Canada's forest regions. The extent to which plant species are going to be impacted by climate change is largely unknown. An often overlooked factor affecting plant growth and distribution, especially in nutrient poor forest soils, is nitrogen. Soil nitrogen characteristics vary, climatically, across the boreal forest range. Identifying adaptation to nitrogen is an important first step to determine changes in distribution of boreal tree species under climate-influenced changes in Nitrogen dynamics. A tree species that covers the majority of the range of the boreal forest is balsam poplar (Populus balsamifera L.). The primary objective of this research is to use natural variations in nitrogen isotopes to identify genetic variability in nitrogen utilization in balsam poplar. From this, we will gain a better understanding of how balsam poplar, and other boreal species, adapt to nitrogen environments and possibly identify useful traits for poplar breeding programs.