Doctoral student Julia Huggins researches some of the smallest organisms to inhabit the depths of our oceans. She is particularly interested in the field of biogeochemistry, i.e. looking at how the Earth system as a whole is regulated by living organisms. 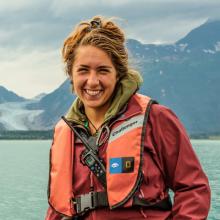 “In large part, we focus on microorganisms because, despite their small size, they have a huge impact on both living and non-living components of Earth's systems--ocean chemistry, atmospheric composition, soil and ground water composition, and the interplay of all of those systems,” said Julia, whose research is an interdisciplinary cross between the departments of Microbiology and Immunology and Earth, Oceans and Atmospheric Science at UBC.

Her current project focuses on ocean chemistry and one of the slightly lesser known implications of climate change in the oceans: deoxygenation. Ocean acidification has become a known term, even outside of the scientific community, but equally pressing and perhaps an even more crucial issue is the loss of oxygen from our oceans.

According to Julia, this is happening at a rate that's much faster than our models predicted. Understanding the implications of this oxygen loss is key to mediating and adapting to changes over the next few decades or centuries.

The doctoral student does a combination of lab-based research and field-based research. “My work looks at how microorganisms in the ocean respond to that loss of oxygen,” she explained. “When there's no oxygen left, microbes start using nitrogen instead. I am looking at the ways organisms can live on nitrogen-based compounds under low-oxygen and how that affects the ocean chemistry, other organisms living in the ocean, and marine primary productivity.”

In addition to improving climate models, Julia hopes her research will also encourage people to think more about the parts of the environment that they don't see. There are things that microorganisms can do to help address modern challenges in ways no other living organisms can, including heavy metal contamination, landfill pollution, oil spills, waste water treatment, and agricultural nutrient imbalances. As we learn more about microorganisms and how to work with them, we are bound to find novel solutions for regulation and remediation.

“It's really easy for us to get excited about charismatic megafauna and things like polar bears, or habitat for other animals and plants that we can see and interact with. But that’s not the end of the story, and especially for those of us who see the world as a whole system, it's important to remember the parts of the system that we can't see.”

For as long as I remember, I've been fascinated by the processes that shape our planet and the ecosystems that support life. There are so many amazing things that microorganisms are doing every day, all around us, that we never notice. They digest our waste, recycle nutrients we need to grow food, produce the oxygen we breathe, and regulate our climate. I studied fungi as an undergraduate and was inspired by learning about all the roles they play in soils and forests. After working in that field for a number of years, I realized I wanted to take the lead on asking new questions and creating new knowledge myself. I am most fascinated by the ways multiple different types of microorganisms can work together to create large-scale processes that change the whole planet, so I decided to pursue a PhD in biogeochemistry.

UBC is a fantastic school with world-class research facilities. Biogeochemistry is such a small field that I feel really lucky to have found one of the leading labs in this field located at such a good school.

Dr. Crowe's research group combines multiple disciplines in both the earth and biological sciences to ask a broad range of questions with diverse applications. I studied a lot of different topics as an undergraduate and I've never been able to limit my interests to any one field. I really appreciate this interdisciplinary approach and my ability to collaborate with researchers from such diverse research backgrounds.

I found an amazing support network of other graduate students who have become a key part of my life, both as colleagues and friends. They've always got my back, whether it's for a coffee break when things get tough, a night out to celebrate an accomplishment, or a long trail run to clear my mind. They have made such an important difference!

My liberal arts undergraduate education prepared me to think across multiple disciplines and be open to approaching new topics. The critical thinking and independence I gained during that time have been key to my success thus far as a graduate student. Additionally, I took a few years between undergraduate and graduate school to travel, work in different areas of research, and gain experience in science outreach and wilderness education. Those experiences made me far more confident about my chosen research path in grad school and they gave me a wide range of leadership skillsets that I now use for leading research teams on field expeditions and working in remote, harsh conditions.

The Pacific Northwest is an outdoor playground! I ski and snowboard in the winter, then bike, run, and climb in the summer. I often walk down to the beach to play with my dog and watch the sunset in the evenings.

Graduate school is a lot of work, but it's more rewarding when you embrace that and fully immerse yourself in your research. It's really a privilege to have a time in your life where you get to focus entirely on creating new knowledge while surrounded by a community of brilliant people who want to support you in that. Take advantage of it! 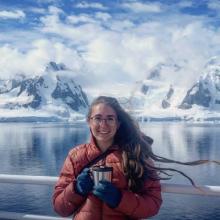 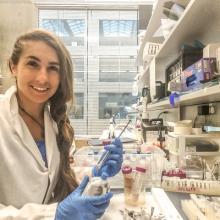 Large areas of the oceans are losing oxygen as a result of human activities, including global warming and fertilizer run-off from agricultural land use. My goal is to create new knowledge about how bacteria in the oceans change seawater chemistry as they respond to oxygen loss. To do this, I go to sea on oceanographic research vessels, collect samples, and do experiments with the live marine bacterial communities. I then combine the information from my direct observations of ocean chemistry and biology with data collected from my experiments to develop improved computer models that will help us better predict how oxygen loss will affect ocean chemistry, marine life, and future climate change.