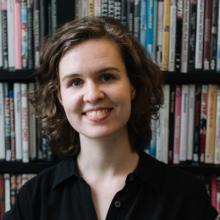 I decided to pursue a graduate degree because I wanted to continue to learn, explore and interrogate new ideas. After stumbling into my current research in sound, I was excited about the prospect of building upon my Master’s thesis, and diving deeper into the central questions I was beginning to consider. I was also looking forward to the opportunity to contribute to a vibrant academic community.

I chose UBC because I was interested in continuing to work with my Master’s thesis supervisor Dr. Lisa Coulthard, as I expand and build upon my sound and disability studies based research. During my time at UBC, I’ve had the chance to see and experience the many opportunities and supports available through the Department of Theatre and Film. I’ve also really come to love the campus and the city.

I was excited about the opportunity to be a part of a small and close-knit PhD program, and the chance to join a growing department as part of its first PhD cohort.

It was a wonderful surprise discovering just how close UBC is to the ocean. The view looking down Main Mall towards the ocean and the mountains still takes my breath away.

It was a wonderful surprise discovering just how close UBC is to the ocean. The view looking down Main Mall towards the ocean and the mountains still takes my breath away.

Throughout my academic career, I have had the opportunity to direct several short films, serve as co-editor-in-chief of a graduate academic journal, sit on a hiring committee, and work in a film archive. I think all these experiences, along with the support of numerous amazing professors over the years, have helped prepare me for this degree.

I play with my cat, listen to audiobooks, watch movies and read graphic novels.

Take breaks. Go for walks. Know that everyone has imposter syndrome.

My research explores how popular film and television shows sonically position Sign Language, deafness and hearing loss, and the role of sound technology in these representations. Although signing is not traditionally associated with sound, films such as the all signing The Tribe (Myroslav Slaboshpytskyi, 2014) vividly depict the haptic, sonic presence of Sign language. The need to recognize and study a plurality of sonic cultures is amplified by a recent influx of portrayals of deafness, hearing loss and Sign language in mainstream film and television—such as A Quiet Place (John Krasinski, 2018), Baby Driver (Edgar Wright 2017), Fargo (Noah Hawley, 2014-), Switched at Birth (Lizzy Weiss, 2011-2017), and The Shape of Water (Guillermo del Toro, 2017). These films stand as vivid examples of cinema’s unique capabilities as an experiential art form, engaging the viewer in a spectrum of sonic experiences through immersive sound technology. The sensory immersion of film makes it the ideal medium in which to interrogate the cultural and political significance of the sound of popular representations of the Deaf community, while also analyzing the role of sound technology and the sonic dimension of Sign language.