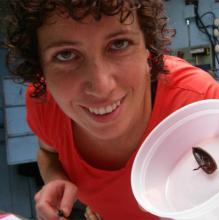 I decided to pursue a graduate degree because it allows me to turn my passion about the natural environment into a career. Not only do I get to travel to incredible places, meet great people, and see amazing wildlife, but I feel that, by becoming a biologist, I can work towards making a difference in something that matters very much to me.

UBC offers a fantastic program at an amazing campus and is also in a wonderful city surrounded by nature.

One thing I love about Vancouver, apart from being an incredibly beautiful city, is that many outdoor activities are so easily accessible, whether it is on the ocean, in the mountains, or in the forest.

I actually enjoy all aspects of my program. I feel incredibly fortunate that, by doing field work deep in the rain forest, I get to explore a pristine environment that many people can only dream of. I also love that I get to travel so much, not only for field work, but also for international conferences and project collaborations. I also really enjoy the creative part in coming up with new research questions and designing experiments to test them. And I do like the challenges of learning new statistical methods.

I think the biggest challenge for me is that I will have to move around a lot if I decide to pursue an academic career, which usually involves several post docs before getting a permanent position. I would not mind this if I was single, but I feel that this type of career can be difficult if you have a partner, because it is a lot to ask of them to either move with you or to be in a long distance relationship.

I love to do all kinds of outdoor activities like mountain biking, backcountry skiing, hiking, jogging, and playing with my dog. I also enjoy good craft beer, of which there is plenty in Vancouver.

I think it is very important to not get overworked and burnt out, which so often happens with graduate students. We often think that, in order to be successful, we have to work evenings and weekends, but I quickly learned that, for me, the key to being productive is to not feel guilty about taking time off. 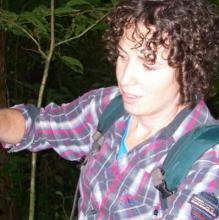 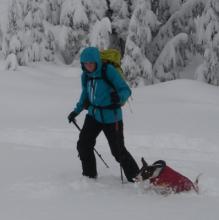 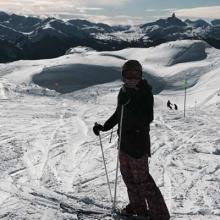 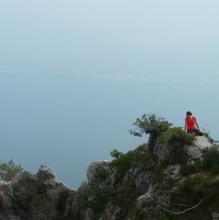 I use the aquatic communities inside bromeliads in Costa Rica as model systems to develop and test models that explore whole ecosystem responses to climate change. So far, my observational surveys show that the top predator (a damselfly larva) is absent from high elevation cloud forest. Moreover, both my models and my manipulative experiments suggest that this species is sensitive to cold temperatures. As temperatures rise, this predator will likely track climate change, invading high elevation forests, with subsequent effects on the community and ecosystem.

Next, I will explore new ecosystem modeling approaches to predict the effects of altered climate and predator invasion, and test these predictions experimentally by transplanting bromeliad communities to lower elevations, where the climate is warmer. With this research, I hope to improve our ability to predict the ecological effects of climate change.