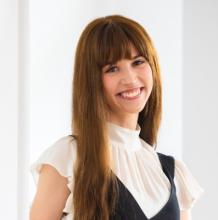 I grew up in a small town in the countryside of Northern Italy. I always had an intense desire, which kept growing stronger, to see and know more about the world. By the time I turned nineteen, I had graduated from a 10-year Diploma di Conservatorio in Piano and started a Master in Piano Performance with the famous concert pianist Joaquín Achúcarro. I left a career as a professional musician behind and decided that I wanted to understand what kind of place there was for beauty in the world. I first started exploring this question within the discipline of international relations, in Italy and then in the United Kingdom, but ended up working mainly in the history of political thought, which is my primary interest here at UBC.

I really wanted to pursue my doctoral studies in Canada, where my Dad was born. I applied to UBC specifically because of the work of Professor Barbara Arneil. I had encountered her writings during my master’s degree and read her pathbreaking books on the history of liberalism and empire.

UBC is an ideal place for studying the history of political thought and critical theory more generally, including postcolonialism and continental political philosophy. In my research I incorporate insights from all these traditions, so the diverse strengths of the faculty really appealed.

Probably the best surprise has been Vancouver’s playfulness and laid-back attitude.

UBC is an ideal place for studying the history of political thought and critical theory more generally, including postcolonialism and continental political philosophy.

I think that discipline and a love for the musicality of writing are some of my greatest debts after all those years playing the piano. I also owe an incredible amount to my parents and to my partner.

Reading books, listening to music, watching movies. I especially enjoy Italian neorealist movies, Third World Cinema, and could watch a hundred times over and over again all the Studio Ghibli movies.

Work hard because inevitably there are going to be challenges along the way. But above all: do not forget your ideals and be persistent.

My research asks what would the 19th-century discourse of civilization look like if we were to examine paintings, rather than treatises or legal documents. During the 19th-century there was a rich debate over the drawing of the boundaries of civilization. The prevailing politico-legal division of the world distinguished the so-called European “family of civilized nations” from non-European “barbarians” and “savages.” The classic narrative which has been told in political theory and international law has broadly described a shift from the more open, and potentially critical, conceptions of civilization of the late 18th-century to a more exclusivist, imperialist 19th-century Eurocentric vision, which was crystallized in the liberal legal principle of “the standard of civilization.”

In the research I enrich and problematize this narrative by uncovering a multiplicity of alternative ways of thinking about civilization, barbarism, and savagery — alternatives which I unearth from the paintings of European and non-European 19th-century visual artists.