In light of the importance of water, climate change and demographic growth, hydrology will remain as one of the most important disciplines of science. I wish to specialize my knowledge and open the doors into academia by doing a PhD.

UBC is one of the most prestigious universities in the world, especially in Forestry, while Vancouver offers a quality of life well known for being one of the best on the planet too.

Remote sensing has always revolutionized the way we do things. It is fascinating to see how satellites and sensors nowadays make our lives so much easier in many ways—from being guided by a GPS while we drive to letting us detect changes in land use at any location. Because hydrology is a discipline that requires intensive and expensive field work, there are many contributions yet to come from remote sensing technologies. My vision is that my research will really improve hydrological modeling and increase efficiency in the way we acquire data, and help the policy makers and population in general to predict flooding more accurately.

To contribute enhanced remote sensing-based inputs to the science of hydrology. To pursue a teaching career in the University. 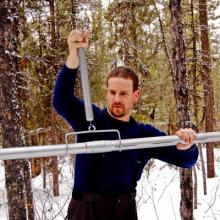 Lodgepole pine forests in British Columbia have been severely affected by the infestation of mountain pine beetle (MPB), resulting in the death of thousands of square kilometres in the province. This represents a dramatic change in the structure of the forests and that in turn can lead to increases in snow accumulation and melting rates, decreases in evapotranspiration, and an overall higher risk of flooding. Our project uses remote sensing technologies such as Light Detection and Ranging (LiDAR), which provides detailed 3-dimensional illustrations of forest structure, and prototype ultrasonic sensors capable of measuring snow depth in remote areas at hourly intervals. The results will allow us to build models that can better predict hydrologic response (i.e. flooding risk) in disturbed and undisturbed watersheds.