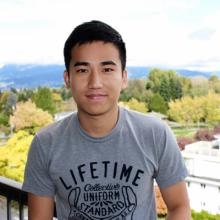 My desire to train as an MD/PhD student stems from the various experiences throughout my life that have brought me closer to my felt calling to a lifework in both medicine and scientific research. It was volunteering in the community and my experiences in clinical contexts that instilled in me a strong will to support others through medicine, whereas my research endeavors showed me the joys of scientific investigation. These experiences together have coalesced into my decision to pursue a career as a clinician-scientist. I strongly believe that the MD/PhD program will help foster the necessary skills to establish scientific approaches to improve medical care.

A combination of factors influenced my desire to attend UBC for its MD/PhD Program. The existing resources and programs that support my specific research interests, the potential to learn from and work with great mentors, the simultaneous pursuit of both clinical and doctoral studies, the variety of support for students and the opportunity to live in and experience British Columbia are all aspects that captured my sincere interest in the program.

Heart disease and stroke are two leading causes of death worldwide. A major contributor is blood clots, or thrombi, that block the normal flow of blood. In the clinic, an important treatment is “clot-busting” drugs of which the most prevalent are based on tissue plasminogen activator (tPA), a natural blood protein involved in dissolving clots. However, tPA is not a perfect drug, because it may cause life-threatening bleeding, some clots are resistant to its effect and it is useful only within a few hours after the onset of symptoms. To avoid some of the critical problems associated with tPA, my project focuses on a novel molecular strategy to trigger clot-busting. It is based on our lab’s discovery that plasmin, a blood protein directly activated by tPA and ultimately responsible for dissolving the clot, modifies the function of blood clotting proteins. We have discovered an exciting new step in the clot-dissolving process where these modified clotting proteins are converted from functioning as “clot-makers” to “clot-breakers” by enhancing tPA activity. Since clotting proteins have clot-specific binding properties, the risk of bleeding may be reduced compared to therapeutic tPA, which has systemic issues. My research goal is to further dissect the role of clotting proteins in clot dissolution through a variety of physical in vitro methods and in vivo animal models. The therapeutic potential of modified clotting proteins offers an exciting direction in the treatment of blood clots and improving the care of patients worldwide.