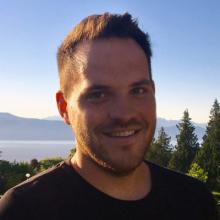 After my master’s degree at the Université de Sherbrooke (Québec), I decided to continue my research and broaden my understanding of democracy and its various components. Having had the opportunity to evolve in multiple spheres outside academia, my choice to pursue a Ph.D. was motivated by my desire to contribute to society as an academic.

The reputation, the expertise, and the strong support of UBC and its Political Science Department were the decisive factors in my decision to pursue a Ph.D. here. I must also add, in all honesty, that Vancouver and its surroundings have helped reach that conclusion.

The Department of Political Science features renowned scholars in political theory. Having the opportunity to evolve among them allows me to broaden my understanding and expand my knowledge on numerous topics. Furthermore, my research interests (democratic theory and citizen participation) are aligned with one of the primary focus of the department. Being able to work with one of the leading scholars in that field is a source of constant motivation.

My best surprise about my experience so far is the quality of life in Vancouver.

The reputation, the expertise, and the strong support of UBC and its Political Science Department were the decisive factors in my decision to study here.

My advice for new graduate students will be to take their time and explore different opportunities before beginning a graduate degree. The experiences that I have accumulated outside academia have all contributed in different ways to my approach and my research. Moreover, I also find important to get involved in your community and take some time to pursue interests outside academia.

My research focuses on the relationship between democracy and hope. Despite a sense of crisis, disorder, and disillusionment in contemporary politics, hope remains a common feature of its practice. However, democratic theory has remained reluctant in engaging with this notion. In this project, I thus propose to investigate its role in democratic politics. I am particularly interested in exploring how democratic innovations and the development of spaces of interactions are contributing to the development of a politics of hope anchored within communities.