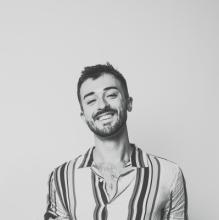 My pursuit of a life in the world of academia began during my undergrad when I was granted an exchange year at the SUNY University at Albany where I met the most influential person of my life, Professor Teresa Ebert. She was notorious for being very strict, demanding and merciless but her academic expertise and passion for political theory fundamentally transformed my academic interest and future trajectory. Even though I left every class with utter mental exhaustion, the knowledge I gained pushed me and my work to new heights. Before I returned to Germany, Prof. Ebert invited me to her office and gave me a collection of her books, urging me to pursue a PhD as she saw great potential in me and my future in political theory.

I decided to join UBC primarily due to my, now, supervisor Ernest Mathijs, who is an exceptional scholar of media and audience reception. He provides the necessary academic background, experience and network to push my work to its fullest potentials. Other secondary reasons were the beautiful scenery of BC, the modern and diverse culture of Vancouver and... of course the proposed funding.

The field of Cinema and Media studies belongs to the department of Theatre and Film which has a diverse offering of study branches such as media studies, film production, theatre studies, and film studies. The combination of all these fields of studies in one department provides diverse perspectives on media from a variety of professors with different interests and specialties. I was very attracted by the potential to work in a program that does not limit you to a single perspective but welcomes interdisciplinary research.

While I saw pictures of Vancouver online before moving here, I was still mesmerized by the beauty of the scenery and the close proximity to the sea and mountains. I also am in love with the cultural diversity and how welcoming the city is to members of the 2SLGBTQIA+.

I decided to join UBC primarily due to my, now, supervisor who is an exceptional scholar of media and audience reception. Other secondary reasons were the beautiful scenery of BC, the modern and diverse culture of Vancouver and of course the proposed funding.

Going to conferences and presenting my work to a wider academic audience! I used to be an actor before grad school and took several acting classes and performed on TV and stage - this allowed me to get rid of any performance anxieties. In fact, I enjoy presenting in front of big audiences the most as their energy and feedback is very rewarding, invigorating my motivation to do more research.

Funnily, as mentioned above, acting and performing on stage was the biggest contributor to my success as a PhD Candidate as it allowed me to already feel comfortable and confident in my speech and presentation. It taught me to channel my energy to the audience and project my voice to the people on the last row. As I intend to work as a professor in my future, I will be spending a lot of time presenting at conferences between teaching classes, which I feel very much prepared and trained for.

I spend most of my time reading up on politics around the world, watching the news, and political commentators on Twitch, such as Hasan Piker. This blends in with my academic interests, allowing me to do research as I am relaxing, doing what I love most. Besides media and politics, I am also heavily invested in the video game culture and industry and spend a lot of time either reading up on gaming and game industry news and of course also playing them.

Do not get intimidated by the amount of work ahead of you. Move one step after another, go day by day and try to leave enough time to explore the world around you - it is highly important to maintain a balanced social life while being in grad school. At times it might seem like you should put school ahead of everything else, but you soon notice that a social circle keeps you sane and provides you with the emotional energy necessary to tackle all academic challenges. Secondly, try to center your thesis around something that you already spend a lot of time and passion towards so that the time of research is spent with something enjoyable and potentially an activity you would already partake in outside of academia. 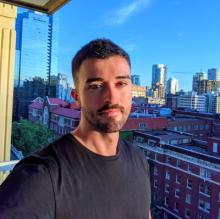 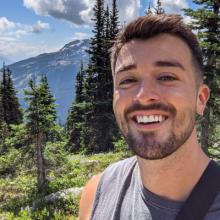 My research proposes an analysis of the live streaming platform Twitch and its users and receptions. The aim is to situate Twitch as a tool of participatory media consumption versus traditionally passive forms that alters Raymond Williams’ claim about flow as perceived in broadcasting media such as radio, or television. Live streaming transforms our media world and advances media studies to 'stream studies' by locating our focus to its participatory essence, expanding and enhancing former concepts of flow towards what I call the dialectical stream. My work’s examination of engagement of the online audience with Twitch streamers reveals the potentials of a community based consumption of news, political debates and talk shows by an audience that is accompanied by a political commentator who is qualified to translate, transcribe, and give further context to the information presented in the consumed media. Differing from a regular political commentator or host on TV, the streamer reacts, interacts, debates, and comments in real time with the audience, as the program or article is being displayed.