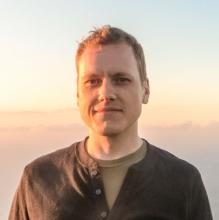 After high school I worked in the computer games industry. After a few years I became bored and frustrated. I was interested in science, history, politics, and the environment, and games began to seem dull in comparison. So I went back to school at the age of twenty-three and became tremendously excited about economics. I decided to pursue a PhD when I realized that a career in economic research was a real, achievable goal.

UBC has a great economics program, with many talented professors. They were also willing to accept me straight out of undergrad.

I have lived in Vancouver before. It is less rainy than I remembered.

I enjoy being surrounded by people who are excited about their research and willing to share their insights.

I’m sure there will be more distant challenges, but the most intimidating thing at the moment is the job market. Getting a job in economics is a highly structured process, and you really only get one attempt to start your career.

The UBC economics program focuses on getting students good job placements. We receive lots of guidance, and I have a real sense that the professors are looking out for us.

The most valuable thing I learned in my career before returning to school was how to manage my time and work independently. But the basic programming skills I learned have turned out to be pretty useful as well.

I try to get outside when I can. Vancouver has many great hiking trails within an hour or two of the city. But it is also nice to just relax with friends and fellow students.

Reach out to your fellow students at the start of your program. I was lucky to be in a cohort with some people who made a big effort to include everyone in a few simple social events. It was enough to start a tight group of friendships that have helped us all cope with the ups and downs of the program.

I have a few different projects in progress. The common theme is using computational text analysis to gather new data on the behavior of various actors in political systems. So I am researching polarization and partisanship using data from Twitter, helping my advisor analyze the effect of lobbying on changes in the text of US federal banking regulations, and exploring the voting behavior of regulatory advisory panels and commissions using meeting minutes and reports.