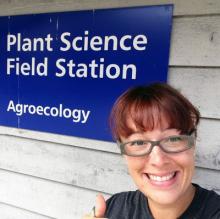 After working professionally in the field of invasive species management for over a decade, my professional work left me feeling like I needed to pursue research to answer important questions that I found nagging at my mind. I felt like I needed to be working in a way that was congruent with who I am as an Interior Salish woman. I wanted to help to identify gaps in invasive species management government policy where consideration of Aboriginal traditional knowledge, cultural beliefs, climate change, food security, and food sovereignty should be included. I wanted to help create a cultural shift in the current discourse in the general field of invasive species management by providing a new vantage point on a very complicated issue. My pursuit of a graduation degree is driven by the hope that I can help to establish that our Indigenous perspectives, oral histories, knowledge, and research approaches are not only valid research tools to address challenging issues, but that the integration of knowledge systems is the key to success as we move forward on challenges we face in the context of climate change.

Having completed my undergraduate degree at UBC, UBC and the Faculty of Land and Food Systems, have a special place in my heart as it was from there that I was launched into an incredibly exciting career. With some of the faculty still being there that I wanted to be able to work with in this new phase of my academic journey, it was a no-brainer for me to go back to my roots and continue to further myself with the support of those that were instrumental in who I have become today. In particular, Dr. Mahesh Upadhyaya for whom I owe my love of Weed Science.

The integrated nature of the program is what attracted me. While I see myself as a "Scientist", I feel strongly that complex issues such as invasive species management, require more than Scientific vantage point to effectively approach the problem. The Integrated Studies in Land and Food Systems program gives me the freedom to apply an Indigenous World view to a field of study that is largely approached only from a Scientific perspective.

The best surprise about UBC for me returning as a more mature student was how it still felt like home after all of these years. While much has changed on campus since I graduated in 2004, the culture still feels the same. Being on campus still fills me with inspiration to be the best I can be and that the tools are here for me to get where I want to go!

The Integrated Studies in Land and Food Systems program gives me the freedom to apply an Indigenous World view to a field of study that is largely approached only from a Scientific perspective.

Already being in the career phase of my life, I see my biggest challenge being the task of taking all of the new knowledge and perspectives I have gained during my PhD and introducing these concepts to other professionals in my field. Some of this knowledge and vantage point will be very challenging for other professionals in my field to understand and accept. I look forward to that challenge and the great discussions and debate I know await me.

I am learning to have confidence in my work and with the help of other graduate students, my Supervisor, my committee and other faculty members, I am getting lots of practice and help in defending my work. I also feel empowered by them that going "outside the box" is important and ok!

Having spent more than a decade in my career before coming back to do my PhD was the best preparation I could have asked for. The exposure to the field when I first started out all the way to becoming a recognized expert in my field were all necessary to laying the path to getting here. These experiences allowed me to discover exactly what questions I wanted to ask. These experiences gave me the unique opportunity to be someone who could bridge the gap between the work happening "on the ground" by practitioners to the research being done int he academic realm that is helping to solve the very problems I faced as a practitioner.

I have a farm in Parksville on beautiful Vancouver Island where growing food and raising chickens puts me in my happy place. The beauty of being part of nourishing your community and family is profoundly fulfilling for me. I also LOVE being outside. If I'm not farming, I can be found hiking somewhere or out on the water, fishing.

The best advice I could give to graduate students is to make sure that you are working with people that inspire and challenge you and that you feel are your biggest cheer leaders for your success. If you have a supervisor and committee that can do that, the rest will fall into place! One other thing is also that the path to the finish line is not linear. It twists, winds, gets muddy, and hits dead ends occasionally. That is how it is for everyone! Embrace it, be emboldened by it, and keep going!

While we know that invasive species cause biodiversity loss, changes in water chemistry, altered bio geochemical processes, hydrological modification and altered food webs (Ehrenfeld 2003; Dukes & Mooney 2004), the specific impacts of invasive species are often generalized and not well understood. Invasive species are studied and subsequently managed from the perspective of Western Science and thus Indigenous perspectives on the invasive species "problem" are largely unknown (Trigger 2016. Invasive species are of concern to Aboriginal communities as they could have a negative impact on plants relied upon for food, materials and medicines for their daily lives, narratives and ceremonies (Tuner 2005). Traditional foods are often overlooked in food security discussions despite them being shown to be more nutritious than conventional diets (Elliott et al. 2012). Climate change and contamination, [such as the biological contamination caused by invasive species], have been cited as factors in affecting access to traditional food. Aboriginal peoples are among the most food insecure groups in Canada. Given that Aboriginal food insecurity is correlated with many-diet related chronic health conditions (Health Canada, 2006), it is important that we have a greater understanding of the potential impacts of invasive species on traditional foods particularly because invasion ecology has been overwhelmed by speculation and bias regarding the ecological consequences of invasive plants (Barney et al 2013). Indigenous knowledge may provide new insights into the assessment and management of invasive species to ensure that both traditional food systems and the ability Indigenous communities to adapt in a changing climate are protected.