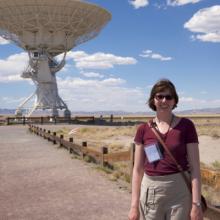 I have always wanted to pursue a graduate degree in astronomy and astrophysics! This has been my dream since I was about five years old, and it’s really exciting to be pursuing it. Very few people grow up to be exactly what they wanted to be, and I’m very blessed to be here.

UBC was my best grad school option for a variety of reasons, most related to research and some administrative. The icing on the cake, however, was the view from the Main Mall flag pole, looking out over the Rose Garden, the Georgia Strait, and the North Shore mountains.

My program, and in particular my research group, is an excellent opportunity to do some of the best and most exciting science in my field. It’s not an exaggeration to say that CHIME/FRB is totally changing the face of the fast radio burst field and very few places can say that.

The best surprise about UBC was the number of opportunities to share my work with people around me. UBC has several excellent science outreach programs, Science World has really accessible volunteer programs, and the high-profile of UBC has opened doors for me to talk to the press and the general public about my work. I love getting to share what I’m working on with the world around me, and UBC provides me with lots of opportunities to do that.

The aspect of my program that I enjoy the most is the opportunity to work on truly cutting edge science. CHIME is one of the most exciting things happening right now in my field, and I am a part of it! There are truly very few places where I could be doing work that is this exciting and revolutionary. I’m also lucky to have a wonderful relationship with my supervisor. I know that at all times, she has my best interests at heart and will support me.

Realistically, my biggest challenge in my future career will be developing a career. I would like to remain in academia for the time being, but I’m fully aware that the academic job market is extremely competitive, and there can be no guarantees.

One way my program is helping me prepare for these challenges is by providing the flexibility to allow me to pursue professional development in my core area of interest – teaching. I have had a large variety of opportunities to hone my skills as a science educator, from co-developing a new lab sequence in ASTR 101 to serving as a lab instructor in PHYS 119 to managing our department’s TA training program. These opportunities allow me to develop as an educator and provide demonstrated experience to put on my CV.

Prior to coming to UBC, I completed my bachelor of science in Engineering Physics at the Colorado School of Mines. The uniquely intense, but supportive environment of Mines was excellent preparation for my UBC graduate program. I learned to work hard and manage competing demands on my time, but I also learned to work collaboratively with peers and faculty members. I have also found that even the courses I thought were annoying or useless in my undergraduate education have served me well in graduate school!

I probably have too many hobbies, but my main hobbies are swing dancing and sewing. I’ve been dancing Lindy Hop for about nine years now, and I fell in love with Balboa during my MSc at UBC. I also sew a lot of my own clothing and have recently started dipping my toes into historical costuming. For Halloween last year, I made a mostly historically accurate outfit based on a portrait of Ada Lovelace (the mother of computer programming).

When prospective or new graduate students ask me for advice, I generally tell them three things. 1) Make sure that graduate school is the only thing you want to do right now. It’s a difficult path without guarantees, and it will still be there in five years if you try something else first. 2) Pick your supervisor carefully and prioritize a person you can work with over the topic you think you’re most interested in. It is much better to be working with a supportive supervisor on your second choice project than to be struggling through your top choice project with poor supervision. 3) Keep your eyes on your own paper. Graduate school is very individual, so if you try to compare your progress to your colleagues, you will only disappoint yourself and become frustrated. Don’t worry about what they’re doing – just worry about what you’re doing. 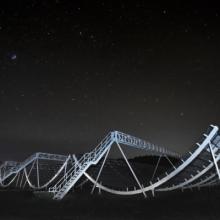 CHIME is a new radio telescope located near Penticton, British Columbia. It was originally designed to be used to map neutral hydrogen in the universe to learn about the expansion history of the universe, but is also being used (simultaneously) to observe pulsars and detect fast radio bursts. Pulsars are what's left behind after a star about 10 times the mass of the Sun dies. They're interesting and extreme objects, which can also be used as powerful tests of gravity and as Galaxy scale gravitational wave detectors. Fast Radio Bursts (FRBs) are mysterious radio transients, lasting thousandths of a second. Some are seen repeatedly, but many are seen only once. We don't yet know what causes them, and we don't know much about them, but we're learning more very quickly with CHIME. During my PhD, I've worked on calibration methods for CHIME, analyzed the complex structure of repeating FRBs, and discovered new pulsars with CHIME.