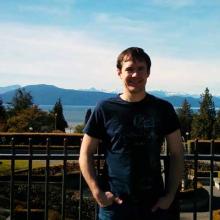 Research excites me! The problems to solve are unique and challenging, plus you get to guide your efforts to fields of personal interest.

My supervisors are internationally renowned injury biomechanics researchers with a depth of knowledge of human neck muscle activity and interactions during automotive collisions. On top of that, I knew from previous visits that UBC is a vibrant campus in a beautiful part of Canada.

Before moving to Vancouver I was excited about the prospect of hiking in the mountains and snowboarding at Whistler, and despite my high expectations I was still surprised with how much I love the outdoor lifestyle at your fingertips here.

The acknowledgment of my work and research accomplishments has been extremely motivating and gratifying. The secure financing allows to me to stay focused on my research, and the travel allowance will allow me to stay up to date and build connections with fellow researchers at conferences.

Enjoy all that life has to offer and relish in the opportunities (and challenges) ahead of you.

The role of neck muscles in automotive collisions has been debated for some time, despite evidence which shows they contract in time and with enough force to influence head kinematics. In my research, I plan to quantitatively test the role of neck muscles in automotive collisions by manipulating the motion of volunteers' heads to mimic low intensity collisions while measuring muscle response and the resistive loads at the head during these events. Repeating this task with the volunteer relaxed or actively resisting the motion, will allow me to determine how much resistive load neck muscles can produce during an impact. This data will also serve as a data set in which the muscle activity and force output of computational neck models can be validated, which will become increasingly important with modeling advances towards neck muscle control algorithms.