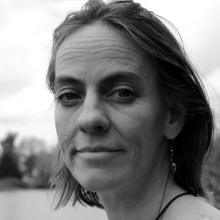 After working for many years as a teacher in alternative schools I felt the need to study, reflect and write. I also believe that one of the most significant unresolved problems in our nation is the treatment of indigenous people. I decided to combine my love of performance and education with my desire to help unsettle and decolonize our world.

The Department of Theatre and Film is a vibrant place with expertise regarding Canadian theatre history and postcolonial intercultural performance. I also appreciate the generosity of the Coast Salish peoples in hosting settlers on this land and UBC offers numerous opportunities to work with First Nations people academically. The First Nations Studies historiography and research methodologies courses have been invaluable in developing my project as well as the opportunity to study the Musqueam language, hən'q'əmin'əm'.

I have lived the eastside of Vancouver since 1991 and I hadn't spent a lot of time on UBC campus until I enrolled in courses in 2007. I was surprised by how dedicated the university is to negotiating a respectful relationship with indigenous peoples on whose unceded territory it sits. I've also been very happy to meet intriguing people from all over the world who are working and studying at UBC.

I aim to understand how and why indigenous performance at this site used language and place-names to assert cultural identity in the context of related intercultural settler performances asserting an urban identity for the city of Vancouver. Understanding this history requires exploring not only how indigenous people resisted colonialism, and their means of cultural continuity despite centuries of violence, but also the indigenous ways of transmitting history that do not depend on the colonial archive.

The award will help to support my family in my final two years while I research and write my dissertation. I will also be able to travel to an international conference on Indigeneity, Performance and Globalization being held in the UK in October 2013. That my research has been considered worthy of this prestigious award also makes me feel hopeful about the future of reconciliation and restitution in our culture.

It is very important to take the time to understand the indigenous people on who will be hosting you on their unceded territory. There are numerous opportunities to learn from the Musqueam, Tsleil-Waututh and Squamish peoples. It is important it to venture off UBC campus to explore all the areas of the Lower Mainland and it’s really worth it to bring (or buy) a bike.

My research concerns indigenous performance with an interest in the use of language and historiographic methods. My dissertation is focused on indigenous and settler cultural performances near the former Coast Salish village of χʷayχʷ əy (aka Brockton Point in Stanley Park). The place's performance history is remarkably complex. On the one hand, it includes potlatches described in oral history accounts; an "Indian Village" run by Skwxwú7mesh Chief Joe Mathias in 1936, as well as a 1943 performance by Mathias and August Jack Khahtsahlano at the rededication of Stanley Park and the current project, Klahowya Village. On the other hand, it includes the Nine O’Clock gun, sporting events, the 1946 Jubilee Show that celebrated the 60th anniversary of the city with an historical pageant, and efforts to import a Kwakwaka'wakw village in the early 1900s, which resulted in an iconic totem pole display still popular with tourists. 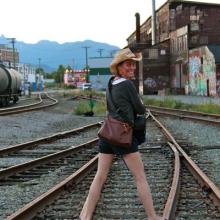