Lessons Learned and Unlearned: A Comparative Analysis of How the Law Affects the Family Forms and Practices of Same-sex and Opposite-sex Households

The symbolic importance of marriage in the United States has increased, a fact reflected in the intensity with which same-sex marriage was pursued and opposed in the United States. Liberalizing trends in morality, attitudes toward homosexuality, and legal rights afforded to LGBT people, coincide with a significant development in the sexual heterogeneity of interpersonal networks. Families and friendship networks have changed and have become sites of potential cultural exchange.

Marriage is both culturally and symbolically powerful in the United States. In fact, its symbolic importance has increased, a fact reflected in the intensity with which same-sex marriage was pursued and opposed in the United States. Liberalizing trends in morality, attitudes toward homosexuality, and legal rights afforded to LGBT people, coincide with a significant development in the sexual heterogeneity of interpersonal networks. Families and friendship networks have changed and have become sites of potential cultural exchange. Consider findings of a Public Religion Research Institutes 2014 survey. The survey, randomly sampling 4509 adults, found that the number of Americans who reported having a gay or lesbian family member or close friend tripled in the last twenty years, from 22% in 1993 to 65% in 2014. This survey highlights a dramatic change in social network composition and provides a compelling rationale for considering how cultural exchanges may occur within and between family networks. My dissertation has three aims. (1) To identify how changing laws concerning marriage affect family forms and practices among LGBQ- and straight-identified individuals. (2) To explore how legal same-sex relationship recognition triggers the assimilation of some LGBT people into mainstream while it also queers the mainstream. When scholars investigate the relationship between gender, sexuality, and family forms, they generally assume that only queer communities embrace non-normative or fluid expressions. However, the increasing sexual diversity of American social networks implies a bilateral commitment to queerness. And (3) to explore families as sites for cultural practices. When families become cross-cultural, as they have with increased sexual heterogeneity of networks—each culture plays a role in interactions. A cultural framework that focuses on the family as practice and process has the potential to examine how social change moves through and between networks.

Being a public scholar means pushing myself beyond the disciplinary boundaries of sociology and academia to engage with non-academic audiences. I think PSI is particularly unique. Oftentimes pursuing a PhD can feel like a narrowing of one’s vision as you focus on specific research questions and develop expertise. PSI encourages scholars to continue cultivating a broad perspective that engages with issues that are of significant public and political concern.

The PSI encourages scholars to pursue research in creative and innovative ways, conceptualizing work with broad societal impacts. I envision the program expanding the applications of scholarly work—transcending traditional career trajectories by building dynamic connections between scholars and the public.

My research is inherently interdisciplinary and applied. To date my work has spanned the fields of psychology, education, advocacy, and mental health counseling. I hope to contribute not just to the advancement of academic knowledge, but also to addressing pragmatic problems that people face.

I hope that my work will have practical implications in several fields. First, I want to engage with the larger community and social partners by translating my work for policy groups focused on LGBTQ rights. Second, as a licensed mental health counselor, I aim to translate my results to improve training for clinicians, social workers, and others working directly with diverse family populations.

My work will contribute to our understanding of macro-level policy consequences, as well as micro-level influences on the well-being of marginalized populations. As a sociologist of sexuality working within a social justice framework, I delight in opportunities to engage in interdisciplinary work and translate my knowledge and skills to bridge gaps between academic researchers and local communities. I relish thinking creatively to devise innovate ways to reach new audiences to expand my contributions to the public good.

I have always been an insatiable learner. I am also a person who thrives most when I am collaborating with others building solutions to problems people face. Graduate study was an opportunity. I provided me with tools I could use to create a career with a lasting and positive impact.

I decided to study at UBC because I knew the Department of Sociology would provide me with rigorous methodological training in an intellectually supportive environment. After visiting UBC upon my acceptance and meeting Dr. Ghaziani, who would become my advisor, I knew UBC was the right place for me to complete my graduate training.

Help scholars like Adriana make a difference in the world!Support the Public Scholars Initiative.

Being a public scholar means pushing myself beyond the disciplinary boundaries of sociology and academia to engage with non-academic audiences. 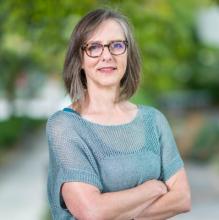