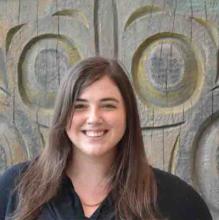 Similar to many of my graduate school colleagues, I’m driven by a multitude of questions that I feel I’ve just begun to wrestle with. A PhD allows me to delve deep into some of these issues.

UBC has an outstanding faculty and group of students who do high quality research. I count myself lucky to work in such a stimulating and supportive environment.

Watching salmon return to their rivers to spawn is always an incredible experience, and something I didn't expect coming from Toronto.

I am most looking forward to travelling along the Pacific Coast for my research. The hardest places to get to are often the most rewarding.

In my time off, I love to explore hiking trails, go fishing, and play board games.

Never go at it alone. Some aspects of graduate school are very rewarding, but there are also a lot of moments in between that are personally and emotionally challenging. My advice to new graduate students is to reach out, especially to grad students that have been around for a while. You'd be surprised by how many people have experienced the same issues and are willing to help!

For over three decades, governments, regulatory bodies, and scientists have embarked on a ‘project of integration’, attempting to incorporate Indigenous Traditional Ecological Knowledge (TEK) with Western scientific research about the environment. However, these efforts have been undermined by several problems, and TEK continues to occupy a marginalized and subordinate position to Western science. Yet meaningful and equitable collaboration between scientists and Indigenous communities is imperative in the face of pressing environmental concerns. Across the country, Indigenous communities are experiencing cultural, economic, and dietary losses as vital animal populations, such as polar bear, caribou, and salmon, are in decline. Addressing these issues requires diverse groups to assess the nature of the problem and the risks it poses, and develop sustainable solutions that can be implemented through local governance. My research investigates the ways in which different knowledge paradigms, Western scientific knowledge and TEK, are evaluated and used to inform policy and management of Pacific Salmon, one of the most iconic and valued group of species on the coast.