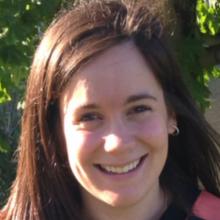 I am a curious person and love learning new things. Participating in research projects as an undergraduate student was the highlight of my degree. Doing research is what motivates me.

UBC offered me the perfect balance between a great place to live, a good research project and a good school. Working with a knowledgeable supervisor in a supportive lab atmosphere is very important to me.

The research project led by my supervisor was my biggest reason to come study here.

How big the campus is and how nice the trails in Pacific Spirit Regional Park are.

UBC offered me the perfect balance between a great place to live, a good research project and a good school.

I love data analysis. It's always great to discover what is hiding in the data.

Stubbornness, a healthy dose of self-criticism and participating in a great number of research projects.

I have many hobbies including knitting, cooking, hiking, swimming and cross-country skiing.

Finding balance is important. Make time for things you enjoy outside of school.

By 2013, more than 550,000 wells had been drilled across the country with the majority located in the Western Canada Sedimentary Basin with 5,000-20,000 new wells drilled each year. After a certain operating period, all wells will need to be plugged and abandoned (P&A). As of December 2016, there were 24,802 wells in British Columbia. Of these, 11% were abandoned and 27.4% were inactive. In Alberta, 151,000 wells have been abandoned which represents 35% of all wells in the province. The consequences of poor P&A are wellbore leakage which can contaminate groundwater, near-surface ecology and damage to marine ecosystems offshore. Wellbore leakage also contributes to greenhouse gas emissions, may present explosive or health risks. P&A is a potential massive societal and environmental problem for Canada. My research project will give an independent assessment of the status of P&A operations, future needs in Canada, adequacy of current regulations and whether existing and legacy wells are constructed effectively.