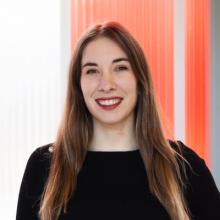 I wanted to learn how to analyze and interpret “big data” of how people’s unique genetics and life experiences contribute to health and disease. I have long been fascinated with the relationship between the heart-brain connection, and understanding how different bodies adapt to mental stress. Also, the more I learn about differences in how mental and heart health are diagnosed and treated differently between sexes and genders, the more I’ve wanted to learn how to interpret these mechanisms and contribute to positive change in my communities from this education.

I was fortunate to have also done my undergraduate degree at UBC (BSc. 2017). From that experience, I knew that UBC had wonderful communities of like-minded researchers and clinicians with whom I knew I wanted to work with and learn from. I was grateful for the opportunity to further expand my professional network here in Vancouver by attending UBC for my graduate studies.

The Medical Genetics program made the most sense to get training and education that will support my career goal, which is to work in precision medicine. I believe that surrounding yourself with people who inspire you to grow and lean into your strengths, as well as to work on your weaknesses, is key to personal and professional growth. I'm very grateful for the people in this program who helped me realize my potential!

I appreciate the quality of life Vancouver offers with so many accessible hikes and beach spots, not to mention the amazing international cuisine!

I knew that UBC had wonderful communities of like-minded researchers and clinicians with whom I knew I wanted to work with and learn from. I was grateful for the opportunity to further expand my professional network here in Vancouver by attending UBC for my graduate studies.

Having worked in the “real world” for a while before starting my MSc., I had insight into the kinds of skills, expertise and topic knowledge that I wanted to build in this degree. I’m grateful for having that internal compass and not feeling lost. Also, learning how to be flexible and open to trying new approaches in my thesis was crucial to adapting to unexpected challenges. I’m thankful that I had developed this mindset and resilience from my previous jobs in teaching and project management to deal with the usual mental hurdles of graduate school, which were compounded by the weight of the COVID-19 pandemic on everyone.

To know your “why”, and to put effort into relationships with your colleagues. Your network and intrinsic motivation are important to have around when times get tough. Also, make sure to schedule in regular protected time - like for exercise, sleep, friends/family time - as grad school is a mental and physical marathon. 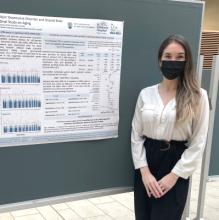 For my thesis, I investigated sex differences in the genetic architecture of depression and associated psychosocial, lifestyle and clinical variables with data from 16,000 people in a Canadian biobank cohort (the CLSA). Depression is a complex, polygenic trait, wherein thousands of genetic variants contribute small effects to lifetime risk of getting disease. I found differences between the sexes in which of these variants contribute genetic risk to depression, what their gene set profiles looked like, and importantly, which psychosocial and clinical covariates also associated with depression risk. Of note, I found evidence that clinical variables that also influence risk of heart disease or cardiometabolic disorders, like high blood pressure, hypothyroidism and diabetes, also had differing effects between the sexes and associated risk of depression. I hope that my research helps to further inspire researchers in the depression spaces to consider cardiovascular variables in their models, given shared underlying mechanisms (ie. chronic low-grade inflammation), and to encourage all researchers to sex-stratify analyses to investigate if variables have different effects between the sexes - not just regressing sex out as a covariate.