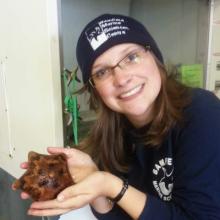 During my undergraduate degree, I had the opportunity to conduct several research projects through courses at the Bamfield Marine Sciences Centre on Vancouver Island. It was through these courses that I discovered a passion for research, which spurred me to undertake a graduate degree and pursue academia. I continue to be curious about the natural world around me and come up with far too many questions than can be answered in a lifetime.

UBC was one of several universities I considered for my graduate degree. The combination of funding, atmosphere, and supervisor were deciding factors in my choice. Scott Hinch is an excellent scientist in the field of salmon conservation and is a great supervisor. It was ultimately him that made me choose UBC.

Juvenile salmon do not have any morphological or physical defense mechanisms, like spines or poison, which makes them especially vulnerable to predation throughout their development. Instead, they rely on detecting predator scents and specific alarm cues released from injured fish. The smell of these alarm cues triggers a series of defensive behaviors that increase the likelihood of survival in the presence of a predator. Unfortunately, even at low levels certain contaminants, like copper and possibly zinc, can interfere with scent detection and render fish essentially defenseless. Through my research, I hope to shed light on the harmful effects of low-level zinc contamination and determine its effect on the recognition of alarm cues and the initiation of anti-predator behaviors in juvenile Coho salmon. The probable disruption of these fishes’ main system of defense could have massive impacts on juvenile Coho survival and should be of considerable concern to conservationists and policy makers. It is vital to understand the influence of sub-lethal levels of toxicants on stream systems and provide strong evidence to support the need for change in how acceptable levels of contaminants are determined.