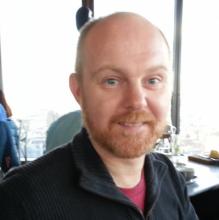 Having practiced law for nearly a decade, and then teaching in the paralegal program at Capilano University for 5 years, I wanted to integrate my passions for law, learning, and teaching into a research project that could be of real benefit to legal scholarship and to Canadians as a whole.

I have spent most of my life and my career in Vancouver and I am committed to staying in the city. Also, I was introduced to my supervisor by a friend who was also his graduate student and I thought he would be a fantastic person to work with.

The PhD program in law offers wide freedom to pursue interdisciplinary work related to law but not confined to it. This intellectual openness and flexibility have allowed me to pursue what interests me and what is important to my topic regardless of where it leads.

No surprised for me! I've lived here most of my life and have attended UBC in the past. I even lived at UBC for a time as a child while my mother was in the dental hygiene program in the 1970s.

I pursued my graduate studies at UBC to integrate my passions for law, learning, and teaching into a research project that could be of real benefit to legal scholarship and Canadians.

What I enjoy most is learning about new areas of scholarship and knowledge, seeing how they fit together with what I already know, and trying to understand the implications. For example, I recently started working with Tom Davidoff at the Sauder School of Business regarding some of the economic questions engaged in my project. Learning to see the questions I was pursuing in a wholly new, yet complementary way has been intellectually invigorating.

Investigating financial policy and property law as a progressive scholar does not set me up for either a classic academic career or for an easy return to industry. The biggest challenge will be finding a niche where I can continue work on these issues with financial support but without the pressure of conforming to a certain business or institutional narrative. The cuts to academia and education around the Western world in recent decades makes this problem even worse, for me and many other aspiring scholars.

Honestly, I don't think the program is preparing me for these challenges. Fortunately, as an older graduate student who developed a career before coming back to school, I am not as worried about lack of career support from my program as I might be if I were younger.

Having a decade of relevant experience in law practice has been an amazing preparation for grad school. It enables me to ask tougher questions, see the greater context, and uncover subtle connections between disciplines and topics. I believe that in general universities should seek older and experienced candidates for grad school and that the direct pipeline from undergrad to a PhD should be substantially curtailed, especially for programs in the humanities and in the professions. The result would be graduate students, and ultimately academics, with a broader perspective and range of life experiences to inform their scholarship.

I am an avid meditator. In the middle of my program I took a term off to go on a 3-month silent meditation retreat. I also run regular meditation groups including a weekly group offered during the school year by the UBC Meditation Community. Starting this fall, I am hoping to take a 2-year intensive course on becoming a meditation community leader and junior teacher.

Every grad student's journey is unique. Don't compare your progress, your project, your methods, or your state of being with other students in your program as nothing useful can be gleaned from that. Try not to take it too personally or too seriously. Perhaps you will not land the job of your dreams at the end of it all, but still, take time to appreciate the incredible opportunity you have been given to learn, to follow your intellectual interests, and to meet amazing people from around the world. Never forget that attending grad school is a privilege.

In November 2017, the federal government announced its first-ever National Housing Strategy (“NHS”). While the program is aimed at disadvantaged groups in Canada and allocates $40 billion for housing measures, it does nothing to address the dependence of the housing finance sector on the use of derivatives and other volatile financial products that were pivotal in causing the 2008 financial crisis. Moreover, unlike most other countries, the Canadian government explicitly guarantees payments to investors in case of mortgage default. This shifts risk from investors to taxpayers and makes financial instruments backed by Canadian mortgages especially valuable to foreign investors. And as most of this happens “behind-the-scenes” in the banking world, few Canadians are aware of it or the impacts it has on housing markets and affordability. I argue that this “mutual leveraging” of residential property and international derivatives, backed by the “full faith and credit” of Canadian taxpayers, contradicts the NHS. The NHS’s series of capital grants aimed at targeted housing sectors is a mere band-aid that is likely to bend under the pressure of an international financial system that aims, with the full knowledge and cooperation of the federal government, to “financialize” residential property and turn Canadian real estate into an investment repository. Instead of or in addition to the Strategy, the government should educate the public about the current connection between mortgages and derivatives markets and engage in a wide-ranging dialogue about housing needs, home ownership, and the appropriate role of the financial sector in the provision of housing.