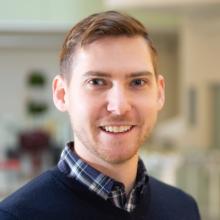 I decided to pursue a graduate degree because I enjoy the challenge of developing methods and hypotheses for the purpose of answering unresolved questions. My long-term professional goal is to pursue a career in academic research focused on lung interventions and possible complications of these treatments. Specifically, I aim to further our understanding of both the immunology and pathophysiology of respiratory diseases. My interest in the immune system stems from investigating lymphoma genetics during my Master’s degree at the University of British Columbia in Medical Genetics. Moreover, due to my varsity athletics background, pollen allergies, and asthma, I was always particularly interested in the human airway and how it interacts with environmental exposures.

I decided to study at UBC because Dr. Carlsten’s Air Pollution Exposure Laboratory offered a unique opportunity that allowed me to further explore my research interests. His laboratory is one of few in the world and the only facility in Canada approved to perform controlled human exposures to diesel exhaust that mimic real-world situations. I am confident that my training at UBC will further develop my independent research, leadership, communication, and presentation skills, allowing me to grow into a dynamic and skilled scientist.

The Experimental Medicine program at UBC offers the latitude to explore health research questions that, by their very nature, are inter-disciplinary. This broader approach allows me to learn from and combine expertise from basic scientists and clinicians that specialize in an array of health science fields to learn more about how our environment influences the function of our respiratory system.

Vancouver is an international city where I have had many opportunities to enjoy different kinds of food, music, and culture. In addition, as a long-distance runner and skier, Vancouver is a pretty exceptional place to live.

I am confident that my training at UBC will further develop my independent research, leadership, communication, and presentation skills, allowing me to grow into a dynamic and skilled scientist.

Following my MSc at UBC, I worked as a research technician and clinical coordinator for two and a half years. The combination of those two experiences provided me with invaluable perspective, resiliency, and research skills that I am continuing to improve upon in my PhD program. This path has not exactly been straightforward, and I would not have been able to navigate its challenges without the support of my wife, family, friends, and colleagues.

Be adaptable, there is no one path to success in graduate studies. Opportunities will often take you by surprise and in a different direction from what you had originally planned, and it is up to you to go after them. Also, take the time to make friends in your program and research group; collaborations often begin by discussing ideas over a beer. 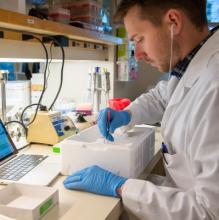 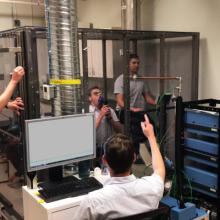 Asthma is a chronic disease that affects over 2.5 million Canadians, placing a significant burden on families and the Canadian health care system. Asthma attacks or exacerbations are periods of progressively worsening symptoms due to swelling and closure of the airways, leading to frightening feelings of suffocation, hospitalization, and even death. Exacerbations are triggered by a number of factors including infections and environmental exposures, such as increased ambient air pollution from forest fires or the deliberate combustion of fossil or biomass fuels. Asthmatics cope with their symptoms using medications broadly called inhaled corticosteroids (ICS). These medications act on cells lining the lungs by turning on and off sets of genes that suppress airway inflammation and asthma symptoms. Recent studies have suggested that increased air pollution may lead to increased ICS use, and our lab’s research has shown that air pollution interrupts ICS’s actions on human lung cells. To further examine this complex interaction, I am investigating the relationship between air pollution and ICS in a controlled human clinical study. In our study, research volunteers are exposed for two hours to filtered air or air pollution at a level experienced in major cities around the world before taking a placebo or ICS. Bronchial epithelial cells collected directly from the volunteers’ airways will be examined using sequencing techniques to determine how increased air pollution influences ICS effectiveness in asthmatic patients. The results of this study can immediately be used to improve treatment guidelines and inform educational policies aimed at preventing asthma attacks. Considering that 92% of the world’s population live in areas exceeding WHO air pollution guidelines, findings from our research have the potential to impact millions of lives in Canada and abroad.