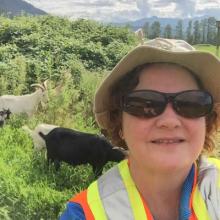 What are your main responsibilities or activities in your current position?

My current tasks include ensuring environmental regulation compliance, encouraging and implementing sustainable practices, and monitoring water and wastewater quality. Additionally, I am responsible for overseeing environmental initiatives at nine federal prisons in BC with a staff of three Institutional Environmental Officers.

How does your current work relate to your graduate degree?

It relates most closely to my M.Sc.(Planning) degree because the prisons are like small cities which must be managed sustainably.

It is an unusual and challenging place to work especially since environmental sustainability is not part of the core mandate.

Is your current career path as you originally intended?

It has been interesting and challenging but not what I had envisioned for myself. I would have liked to have a job in agri-environmental policy research and development, but I have been unable to find anything for which I am qualified.

What motivated you to pursue graduate work at UBC?

A desire to learn more and to contribute to society in a meaningful manner.

Camaraderie with my fellow graduate students and professors.

What key things did you do, or what attitudes or approaches did you have, that contributed to your success?

I refused to be a failure. When I failed my first year of UBC I felt terrible for myself and for my parents. I never wanted to feel that way again. I studied hard and I studied smart. I figured out where my weaknesses were in studying and improved my study habits. It doesn't take a genius to get a university degree, it takes a person with dedication and commitment.

I feel like I should say that you should study something practical, but I can't. Follow your heart and study what excites your brain. On the practical side I would suggest you try to find a job in an area related to your studies while you are going to school. Even though working while you are going to school is challenging it can actually make you a much more efficient worker. I was raising two kids, working two or three jobs at a time, and I managed to complete all my degrees within pretty reasonable time frames (5 years for the BSc(Agr), 3 years for the MSc(Planning), and 5 years for the PhD).

Yes, I had breaks in my education and no, they were not planned. I failed first year agricultural sciences because I was young and really didn't want to be at university. However, I took a year off, travelled through the South Pacific on my own and returned with a new zest for learning. I re-entered the Faculty of Agriculture, but I was disillusioned by the focus on animals as cogs in the agri-business machine. I switched to the Faculty of Arts and received a BA in English literature in 1986. When I learned that the Faculty of Agriculture had a new option called Agroecology around 1995, I was intrigued and returned to UBC (with two pre-school children at home). I graduated at the top of my class in 2000 and won the PA Boving Prize in Agriculture. I then entered the School of Community and Regional Planning at UBC to complete a M.Sc. in Environmental Planning. I managed to get a job as a Planner with the Township of Langley while I was completing my degree. This provided great insight into the often conflicting theoretical and practical sides of Planning. I was still itching to learn after I finished my Master's degree in 2003, so I entered the PhD program in 2004 (now a single parent with two adolescents to look after). I finished my PhD in 2009.

What challenges did you face in your graduate degree, or in launching your career?

I faced many challenges. I think I have encapsulated the main challenges in my previous comments.