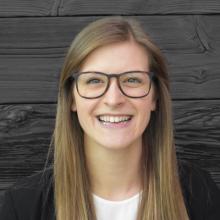 Over the past ten years my education and work-related experiences have cultivated my passion for microbiology and studying bacterial ecosystems. I have a passion for exploring the commensal relationship between our gastrointestinal microbiota and the development of our immune system. This enthusiasm drove me to pursue a PhD with a desire to share this knowledge and passion with others through my future aspirations of teaching as an instructor, and continuing research within this field.

UBC has an excellent Microbiology & Immunology graduate degree program. I was able to find many excellent researchers and world-renown faculty that I would be interested in working with, with projects that were fascinating to me. As a University, UBC has an international presence, as well as a beautiful campus.

The department of Microbiology & Immunology is a strong community, and offered a lot of support for me when I began inquiring about the PhD program. The department staff were very helpful, especially the graduate advisor and program coordinator. Their guidance was key in making my final decision to apply.

UBC has an excellent Microbiology & Immunology graduate degree program. I was able to find many excellent researchers and world-renown faculty that I would be interested in working with, with projects that were fascinating to me. As a University, UBC has an international presence, as well as a beautiful campus.

I first became excited about microbial ecology while completing a Bachelor of Science at Kings University in Edmonton, through an independent research project identifying and examining bacteria discovered in petroleum contaminated soils. Following graduation, I joined Exciton Technologies Inc., a research and development company producing silver-based wound care products for treating multi-drug resistant wound infections. I was advised while at Exciton to consider furthering my education and enrolling in a graduate degree. I joined Dr. Benjamin Willing’s lab at the University of Alberta to complete a Master of Science studying the impact of husbandry practices in the development of the gastrointestinal microbiota, Salmonella infection resistance, and immune response in broiler production. While conducting my principal thesis research, I collaborated on an additional project investigating the effects of excess dietary vitamin B12 on an infectious colitis model in mice, which ignited my passion for studying the gastrointestinal microbiome in health and disease.

I spend a lot of my free time with my 1-year old dog Jack, going on walks, hikes, and to the beach. Additionally, during the summer I like to go kayaking and sailing, exploring False Creek and English Bay.

Take advantage of all of the networking opportunities that the department creates, and make sure to take all opportunities to present your research in front of your peers and faculty. The practice will be critical for your future success, and creating a broad range of relationships becomes very helpful while learning new skills in your research. 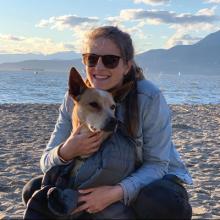 Osmotic diarrhea is a prevalent condition concurrent with diverse pathologies such as Crohn’s disease, celiac disease, and dietary intolerances, and is due to unabsorbed solutes in the gastrointestinal contents inhibiting normal water absorption. Osmotic laxatives such as polyethylene glycol (PEG) take advantage of this process to counteract constipation, and over 3% of children as young as pre-school aged are prescribed osmotic laxatives. As laxatives have been shown to cause long-term changes to the microbial communities living in the gut, this perturbation during a formative period for gut microbial community development may play a key role in immune development and host health, and therefore needs to be investigated further. A surprising effect of osmotic laxative administration to a mouse model is the disappearance of the highly abundant bacterial family S24-7. Even after short-term doses of osmotic laxatives, S24-7 goes extinct in a humanized mouse model of the treatment. Excitingly, despite community re-equilibration in its absence, S24-7 is capable of superseding the other bacterial colonizers to its original abundance if reintroduced into the environment, thereby highlighting the potential of this bacterial family to a model for microbiota reintroduction in therapeutic applications. My goal is to uncover the mechanisms underlying S24-7 sensitivity to osmotic perturbation, and to decipher what host and bacterial factors are necessary for its successful recolonization. The S24-7 family is known to be the most prevalent proximal gut bacterium in homeothermic animals including humans. This family is also highly prevalent in mice, where it can make up 50% of the bacterial community. Following osmotic perturbation, S24-7 is replaced by the genetically similar Bacteroidaceae family. One member of this family, Bacteroides thetaiotaomicron, is an abundant, genetically tractable gut commensal that increases in abundance as the S24-7 family undergoes extinction during PEG treatment. B. thetaiotaomicron is genetically related to S24-7 and is able to invade the niche opened up by S24-7 during osmotic diarrhea4. Through genome annotation of both species I have found that B. thetaiotaomicron possesses genes involved in the response to osmotic stress that are not present in S24-7. By investigating whether these genes are required for B. thetaiotaomicron osmotic tolerance, I aim to shed light into the S24-7 family inability to survive during osmotic perturbation. Furthermore, unlike other bacterial species whose order of introduction determines colonization ability7, S24-7 is uniquely capable of penetrating a stabilized microbial environment. This presents S24-7 as a great model organism for studying bacterial sensitivity to common abiotic perturbations, and understanding the mechanisms for bacterial colonization and re-colonization for microbiota therapies.