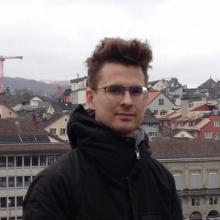 I'm daily struck by how much there is to learn, especially about such a complex and multifaceted phenomenon as capitalism. A graduate education, therefore, seems like a great opportunity to really get time and resources to think long and hard about the questions that intrigue me.

UBC Geography is one of the foremost centers for research in geographical political economy so when I received an offer to start my PhD here I was thrilled to join a community of faculty, staff, and students whose work really excites me.

In particular, I appreciated how the master's program in Geography gives you a lot of freedom to explore your own interests through extended independent research.

I was surprised by how welcomed I felt when arriving in the Geography department. Despite 'only' being a master’s student, people were genuinely interested in what you were up to. As a consequence, I didn't just socialize within my cohort but got to learn from many grad students that were further along in the program than me.

I really appreciate the more casual opportunities to learn together in more or less formalized readings groups. These reading groups help mitigate the isolation that is such a prevalent feature of academic work and make sure that you're not simply trapped inside your own head. And since every new cohort of grad students bring with them new insights and provocations, I'm going to look forward to each new academic year in the program.

While a graduate education is hard work, I try to make sure to always find time to hang out with friends, dance lindy hop and just walk around in the city.

I would advise masters students to not be afraid of going out and doing fieldwork. It might be intimidating at first, but you'll never be 'fully prepared' and there is nothing that beats spending time in the field to wrap your head around a research problem.

My dissertation research revisits the history and geography of 20th-century American capitalism as seen through the Federal Reserve System, grappling with one core problematic: how is a national macroeconomy constituted out of the uneven geographies characterizing capitalist development? While geographers have long theorized processes of uneven development, there is a widespread tendency across 20th-century political economy to naturalize the American experience as expressing an ideal-type and model of capitalist development, as an almost completed capitalism against which to compare the rest of the world. Against this critical consensus, I draw on historical research to offer a revisionist account of the making the American macroeconomy that attends to the complex relations of dis/articulation through which the Federal Reserve System reads and regulates the nation’s restructuring regional economies.